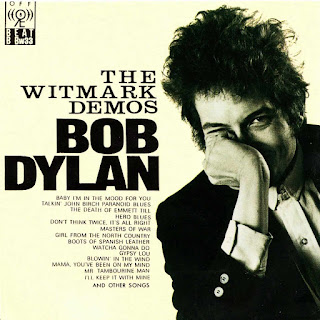 Bob Dylan’s ‘Hero Blues’ is a composition which surprisingly never found a home on a Bob Dylan official release. Even though the song was never destined for Dylan’s mainstream audience, it retains a mystical history and important slot in Dylan’s colossal discography. Originally recorded on December 6, 1962 for the LP The Freewheelin’ Bob Dylan, the tune has taken on a number of permutations over its varied existence.

Dylan recorded studio versions on both piano and guitar with both featuring his trademark harmonica. The song, while immortalized in the studio also made a few limited live appearances with the early definitive version hailing from the famed Town Hall concert on April 12, 1963 recorded shortly after one of its studio run throughs. Today in the ‘rock room’ I am enjoying the version featured on the Bootleg Series Volume 9 Witmark demos (the guitar/harp rendition recorded in 1963) which has in turn led me through the aforementioned versions, including its return to the live stage for a limited time on the Bob Dylan and the Band 1974 tour after a ten year absence.

As previously mentioned, ‘Hero Blues’ and its compositional metamorphosis was never available on an official release for a number of years. It did leak out on some ‘bootlegs’ for the hardcore. But with the release of the Bootleg Series Volume 9, The Witmark Demos in 2010 and with the rare and hard to find European Copyright Collection in 2012, a studio glimpse has given fans insight into the song and its recording process. With both of the above releases taken into account three takes (1, 2 and 4) from the December sessions and the publishing demo from 1963 are available for enjoyment.  The piano version has not yet seen an official release but was run-through during the sessions for The Times They Are A Changin and followed the above guitar readings.

Content wise the song is based around a theme which Dylan had played within other compositions; that the narrator need to be a fighter in both war and domesticity so his woman has something to be proud of and to speak about. The lyrics contain an attitude that Dylan asserts through his narrator that the most important thing to his girl/love interest is that her man is a ‘hero’, hence the title.
The subject believes that his ‘gal’ may have too much going on in her head and feels the need to live up to some invisible social standard which he too must strive for. ‘She reads too many books, she’s got nails inside her head, she won’t be satisfied until I end up dead’.  Association with celebrity or in this case more importantly with someone who is putting their life on the line and portrays honor is how the ‘girl’ in ‘Hero Blues’ relates to others. Looking through the lens of how others see us is the crux of the song, but with the Dylan twist of how others see us can be based on our accomplishments or more importantly our representations. 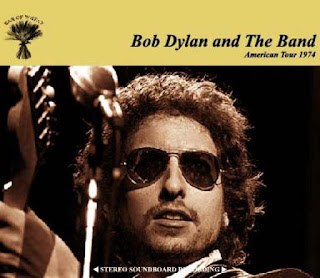 The three takes recorded in preparation for the Freewheelin’ album are all similar in scope with the exception of take 4 lacking the ‘books’ verses. Each respective verse is separated by a simple descending plucked guitar lick. Dylan varies his just slightly with each take with the final take having more ‘aggressive’ vocals.  It has been speculated that ‘Hero Blues’ was tabbed for the Freewheelin’ record but was bumped in favor of ‘One to Many Mornings’. Fingerprints of other Dylan compositions from the same era can be discerned in ‘Hero Blues’ cuts like ‘It Ain Me Babe’ dip from the same well of influence.

The version on piano and harp from 1963 has its own unique charm and is an all time favorite of the ‘rock room’.  Highlighted by Dylan’s rickety boogie-woogie piano, the song cooks and blows steam with Dylan’s well timed harp blasts. The tune begins with the aforementioned wining harp and Dylan setting the rolling groove with his eclectic piano playing. The lyrics have been updated with the second and third verses differing slightly. I love the character of the piano reading as the tempo wobbles, the harp squeals and Dylan bites.

The publishing version from May 1963 stays close to the original studio arrangement and also features guitar and harmonica. This publishing performance closely follows the song’s live premier in April of 1963 at the famed Town Hall concert in NYC. That the song was worked out in a number of different ways illustrates that Dylan did have plans for the track whether on one of his LP’s, or for a contemporary artist to issue a cover version.

When Dylan premiered the song live on April 12, 1963 at the aforementioned Town Hall concert, he prefaced the tune with, ‘This is for all the, uh, boys that know girls that want 'em, uh, to go out and get themselves killed.’ What follows is stunning as Dylan plays a definitive version, with hearty breathy vocals and a youthful investment. The song unfolds patiently with Dylan’s harp blasts answering each verse. Stunning. A must hear, as is the entire Town Hall performance.  When Dylan concluded ‘Hero Blues’ that evening the composition was then inexplicably shelved; obscured for more than a decade under the weight of what was arguably Dylan’s most prolific composing era. 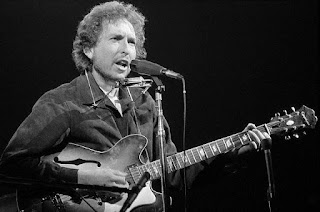 Much later, in typical Dylan fashion, he unearthed the song for his 1974 tour set list. The series of dates was Dylan’s return to the road for the first time since 1966. While ‘Hero Blues’ appearance only lasted for two shows, it was used to open both of the inaugural concerts in Chicago on January 3 and 4 1974 as a not so subtle commentary on how Dylan viewed his return to the performing stage and how it was perceived.

Art imitates life, and the duality of the lyrics of ‘Hero Blues’ when performed in 1963 and 1974 both relate to hero worship as both a soldier becoming a hero by giving his life in war and to a lesser extent being an artist/celebrity and being looked to as some sort of savior. In short, the song became relevant to Bob once again but in a more personal way. This man was viewed as some kind of musical savior and was pegged with being the 'voice' of a generation he hardly knew.  The song had been birthed as protest and grew into a commentary on its author.

Whereas in the early 60’s ‘Hero Blues’ fit right in with Dylan’s early topical numbers, in the 1970’s it became an explanation on ‘Dylan’ himself through the eyes of Zimmerman. The circulating recordings of ‘Hero Blues’ from the opening Chicago shows are fiery and eager. The symbolism attached to the song being the show opener is relevant. The Band is hot with Robertson taking a number of clenched guitar breaks lending to the drama of the performance. Danko and Helm walk in a honky tonk lock step with Danko’s plump fretless bass thumps urging along the groove. This Tour 74’ arrangement is reminiscent to the group’s ‘Hollis Brown’ musical approaches.  The 1974 version of the song is a slamming ‘country honk’, with accusatory vocals and fiery attitude.

Similarly to other ‘deep cuts’ in the Dylan catalog (ie: Blind Willie McTell, Abandoned Love) ‘Hero Blues’ made its appearance and then disappeared into the graveyard of Dylan compositions not destined to be featured on an official release. Since its final on stage performance in 1974 the song was never to be heard from again in front of a paying audience. The cut featured Dylan’s typically acerbic wit in addition to his unique portrayal of relationships, hero worship and idolization. For reasons never to be explained Dylan often left the songs his listeners felt to be major compositions left to languish in the vaults. Fortunately for us, there is documentation of these legendary tracks in addition to a critical reassessment of these hidden jewels via the ongoing Bootleg Series.