Vox first started to build guitars in 1961, and in 1962 in order to compete with American instrument makers Vox introduced their iconic Phantom guitar. Most if not all British aspiring and popular rock and roll musicians were using the Vox AC-30 amplifiers as a cheaper alternative to paying taxes and import fees on American made amps. Vox was started by Tom Jennings as a company that could compete with the American companies like Fender, Gibson and Rickenbacker. In 1963 the Jennings Company Vox debuted the Vox MK series of guitars often referred to as the Teardrop and Phantom respectively.

The MK III Teardrop because of its use during the ‘Stones’ early ascension to popularity soon became synonymous with Brian Jones. Similarly to Paul McCartney and his Hofner bass and John Lennon and his Rickenbacker 325, when one thought of Jones the guitar was almost an extension of his being.The guitar’s unusual body, unconventional build and use by Jones assisted in making Vox the chosen guitar for many British artists including the Hollies and David Bowie. As they say, ‘Imitation is the most sincere form of flattery’. 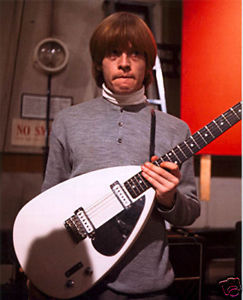 The obvious marketing move was to get these instruments into some of the famed British musician’s hands of the time for their use and for some free promotion. At the time (1963) the Rolling Stones were inching toward world domination and superstardom and were just beginning to reap the rewards of their musical genius and instrumental prowess. Their early appearances illustrate that the band had yet to upgrade their gear as a smattering of Harmony, Selmer and Hofner instruments graced their stages. The first level of their ascendant popularity consisted of appearances and promotions. Brian Jones, guitarist and multi-instrumenalist and at the time the cherub faced leader of the ‘Rolling Stones’ was the first lucky recipient of one of Vox’s premier prototypes.

During this era of the Stones formative years Jones can be witnessed playing a quivering slide part over the band’s plethora of blues covers on the MK III, or scrubbing out a chugging metallic brush stroke of rhythm.  In addition to his ‘Teardrop’ guitar Jennings Musical Enterprises also gave Brian a matching Vox MK III 12 string which was handmade by Mick Bennett as was Jones’ 6 string.
Jones prototype guitar was built in Vox’s Dartmouth, England factory and contains minor yet significant differences to the regular run of instruments. The instrument contained two single coil pickups, a three position selector switch for using one or both of the pickups respectively. Under the switch the guitar had both volume and tone control knobs. The guitar setup was based around and somewhat mirrored the popular Fender Telecaster alignment which was also a guitar that many of Brian Jones’ idols played and he also liked himself.

The headstock was arranged with ‘six on a side’ tuning pegs and the Vox logo. The saddle/bridge was also modeled after the American Stratocaster on Brian’s guitar edition with later mainstream editions including a Bigsby vibrato tail piece. The bridge on Brian’s prototype originated from an original 1950’s Strat where it was removed and then affixed to the body of the Vox. (see video) The backside of the instrument shows a ground wire leading from the back of the sustain block leading in lo-fi fashion to the guitars plastic hatch. Many musicians and curators have remarked upon seeing and playing the guitar that upon close inspection it is truly a ‘handmade’ guitar. Lots of personality and mojo contained within. 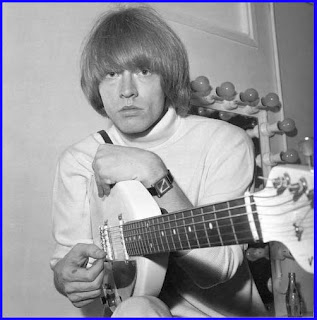 Also unique to the guitar was its ‘zero fret’ located at the top of the head stock to increase the guitars sustain by holding the strings the appropriate distance above the neck. Finally, as an added bonus the back of the guitar came with a circular snap on protective pad which was designed to protect the guitar from the scrapings of a musicians belt buckle.

The famed Vox was used often by Brian on stage in the bands formative days. It can be seen in action when the Stones debuted on the Ed Sullivan Show on October 25, 1964 as well as the group’s appearance on the Tami Show on where its stannic aesthetic can be witnessed chugging out the R and B stomp critical to the Stones early classics (through Fender amplification). The guitars clean white lines, elegant weeping shape and bristled tone matched perfectly with Jones unique look and personality. Jones used the guitar on stage in 1964 and 1965 and it quickly became a part of his image, the guitar was not used in the studio as often as it is said that its shape made it hard to record while sitting down. While the guitars studio use cannot be tracked perfectly, Jones did use the guitar on the Stones classic ‘It’s All Over Now” where it’s trademark ‘tinny’ tone is a result of the aforementioned single coil pickups. 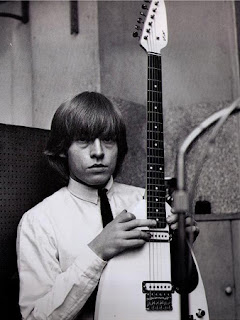 As quickly as Jones had co-opted the Vox; as was his wont Jones would use a number of other guitars throughout his tenure with the Stones.  Explorers, Les Paul’s and Gretch would also help to create his instrumental arsenal. The Vox MK III’s own handcrafted history in addition to its owner’s own unique musical aura add up to one of rock history’s most recognizable and just plain cool guitars.

The instrument was sold at Sotheby’s auction in 1984 for the blue light special price of $3,200 to the Hard Rock Café. It has since been displayed for a number of years and now can be located in the Hard Rock’s substantial London vault. It’s obvious the guitar is saturated with some heavy duty mojo.
As a final aside, there is a tall tale that Ronnie Wood picked up one of Brian’s Vox guitars (his 12 string?) to try on while the band was in preparation for the Stones 1989 Steel Wheels tour. The result being that he was quickly met with a sharp ‘Keep yer fuckin’ hands off of it’ by Keef.

Posted by talkfromtherockroom at 8:01 AM No comments: