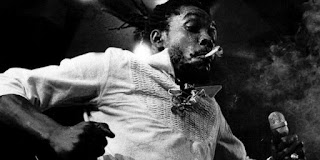 Spinning today in the ‘reggae room’ are sweet smoky riddims of Peter Tosh’s 1981 classic cut, ‘Coming In Hot’. The song is the lead off track from Tosh’s excellent full length 1981 LP Wanted Dread and Alive, Tosh’s 5th solo record. The song was also released as a single in conjunction with the LP b/w ‘Reggae Mylitis’. Typically for many of Tosh’s songs, it did not make a huge dent in the popular charts but quickly became one of his on stage favorites as well as one of his career defining cuts. A track that deftly blends all of the ‘Mystic Man’s musical and composing abilities.

The magic contained within Peter Tosh was his innate ability to combine stunning and unique melody with often serious content and direct messages. This keen ability often kept Tosh out of the mainstream as much of his lyrical directive was hard to accept for your everyday normal music listener. His expression of love for Rastafarianism, Emperor Haile Selassie (Jah), herb and his Jamaican brethren didn’t always connect with an often closed minded public.  But for his followers and serious reggae fans though; Tosh’s storytelling and unabashed calling out of oppressors, downpressors and shady governments was to be honored. This endeared him to the forgotten and the poor of his own country of Jamaica as he spoke directly to them and without pretense.

In the case of ‘Coming in Hot’, Tosh cross pollinates an addictive musical theme with a double entendre lyric about his personal attitudes toward himself and his relationship with the muse of music. His deftly uses the metaphor of a gun to match with his musical inspiration as each description of the weapon’s makeup builds to Tosh ‘pul(ing) the trigger’. Weapons, both symbolically and in reality unfortunately hold a visible spot in Jamaica’s turbulent history. ‘Coming in Hot/Firing Some Shot/Coming in Hot/It’s A Musical Shot’, sings the opening stanza which sets the stage for Tosh to explore the narrative on top of the heavy one drop. 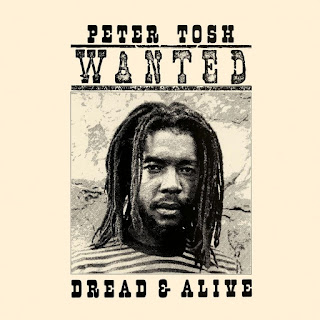 ‘Comin in Hot’ begins with Sly Dunbar’s crisp kick drum initiating a syncopated opening punctuated by starter gun snare cracks. A brief pause and the song begins in earnest with the aforementioned chorus lines and a gnarly roots groove. Robbie Shakespeare’s bass is substantial and reverberates as a big oar navigating the songs choppy riddim. It sounds like Dunbar wants to play a straight rock beat but the groove is shifty and is dotted by rich wafts of percussion. Dunbar’s double bass responds in kind, pumping dark red blood into the song’s flesh.

Following the introductory chorus, the verses waft in like a long draw on a smoky spliff. Dunbar plays it thick and straight while Tosh’s mesmerizing sermon explains matter a factly what this musical heat wave effect has on his inspiration and his physicality. Subtle interjections of dancehall keyboards and sweet  well timed backing vocals by ‘The Tamlin’s are the noticeable craft work, but as previously stated, Sly and Robbie are the heavies blowing on the coals. Tosh's dark rich baritone exudes cool while lending the song a believable edge.

Following a steamy beach walk around the verses and chorus comes a mid-song key change. The moment is just long enough to twist your ear before quickly returning to the song proper. While just a fleeting musical moment, the change is the kind that the ‘rock room’ lives for and is sure to give you  an ‘irie’ feeling. The closing verses float back in on Tosh's rhythmic phrasing, before allowing the song to fade out into the run out grooves. 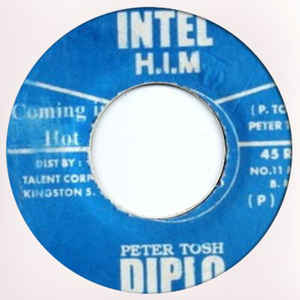 The ‘rock room’ is quite stumped for why this track did not make a bigger dent, but then again I understand that Tosh’s commerciality in no way reflects his amazing abilities. On his own island I am sure it blasted from the smoky doorways of Jamaica clubs additionally having a special place for music lovers on the island. Tosh was a prophet and music was his medium. Like all prophets, the message disseminated is not always what one wants to hear, or alternatively the message is too painful because of its truth. ‘Coming In Hot’ was Tosh’s statement of confidence, power and inspiration in himself and an amazing track with no finger pointing involved. Tosh is playing the true ‘Rastaman’ who’s purpose is to illicit ‘positive vibrations’.

‘Coming in Hot’s’ sustainable makeup and longevity is proven as over 35 years later Tosh’s grandson Dre Tosh re cut ‘Coming In Hot’ as a tribute to his grandfather, his country and to Rastafarianism in 2017. While listening to this updated version I am again reminded of the quiet power and majesty of Peter Tosh’s catalog and its enduring message. Whenever you hear reggae music and feel it’s one drop caress, and enjoy it’s happy vibes, remember like everything there is a Ying and a Yang to be considered. In the case of Peter Tosh the balance is ‘positivity’ as well as a fight for, ‘equal rights and justice’.