The Raconteurs -'Doing It His Own Way' - Help Us Stranger LP 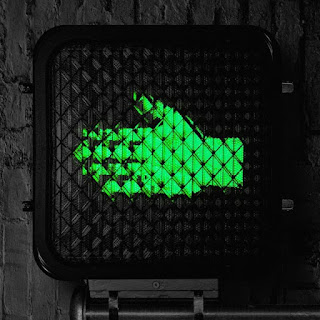 Creating and disseminating music is a joyful thing. Be it for the creators of said music, or for the aural recipient of the tunes. Obviously in these modern times music has become a commodity; a corporate effort made up of hundreds of composers, producers, fluffers, mixers and lyricists. Hopefully the effort of the collaborative amalgamated hierarchy can create a superstar out of their combined efforts. If they are luck the money will soon follow.

What has become rare in this conflicted musical atmosphere is a small group of talented hard working musicians who ‘do it themselves’. A tribe of fiends who’s unique abilities and differing outlooks that when working toward a common musical goal birth an organic stew of musical alchemy. Enter the Raconteurs and their new album Help Us Stranger.

After an unintentional 10 year hiatus, the muse finally called on the band’s respective members and brought them together for another attempt at an unadulterated and musical rock and roll release, the first since 2008’s Consolers of the Lonely. Both of the principal song smiths, Jack White and Brendan Benson have described the journey to the records fruition as taking ‘baby steps’. Both the internal chemistry of the band and lack of pressure to deliver anything but to themselves initiated the record’s homegrown aesthetic. Additionally it doesn’t hurt that musical mogul Jack White owns the label, studios and pressing plants involved! 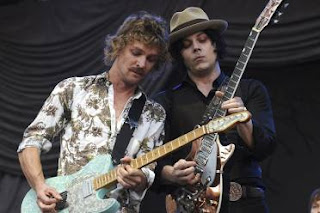 What makes Help Us Stranger not only unique but extraordinary is the spotlighted abilities of each of its members. This is not a Jack White vanity project nor has it ever been. Each piece of the group is as vital as the other. Featuring what Jack White refers to as the best rhythm section in rock and he is correct in that statement,, drummer Patrick Keeler and bassist Jack Lawrence, (of the Greenhornes) the group has the ability to serve the songs in whatever way they require. Regardless if the song is a gritty sandpaper groove like “Don’t Bother Me”, or a triplet filled ‘rave up’ like “Hey Gyp (Dig the Slowness)” the band is balanced on the knife edge and on consistently point. The group reminds the ‘rock room’ of a favorite family relative, the black sheep, always dependable, and the person who sticks to their values, which in this case are musical. This family member is honest, talented and most importantly cares about history, their craft and their personal as well as collaborative ideals.

Each individual cut of the Help Us Stranger LP features a sticky piece of ‘ear candy’ for the listener to suck on. Whether it’s the psychedelic haze of the middle eight drizzled over the first single “Sunday Driver”, the spacious and cinematic production of ‘Now That Your Gone’, or the plump and blunt syncopation of “What’s Yours Is Mine”. There is no mysterious veil to be lifted on this album which is probably why some reviewer’s (Pitchfork, I See You) seem to need a gimmick or some sort of hand holding to understand the record’s unpretentious charm. This claim is supported by the album track “Someday’s (I Don’t Feel l Like Trying”), a titanic number in the ‘rock room’s’ humble opinion and an weighty example of the unadorned and forthright expression of the LP’s collected songs. Special note to the thick footed guitar orchestrations which raise the chorus to goose bump levels.

From the LP’s triumphant opening cut, “Bored and Razed” which was almost left off the recording until drummer Patrick Keeler nudged the song’s composers to get some lyrics going, to the closing meditation of “Thoughts and Prayers” the record states, “This is us, take it or leave it”.  Regarding the aforementioned opening track, Keeler’s decision to push for the song illustrates the true collaborations that took place in the studio to make the record what it is. All four members produced the recording, Keeler did the LP art and as previously stated White’s Third Man Records is where the recordings can call home. A true labor of love that states the truth of the saying, ‘the sum is greater than the individual parts”. 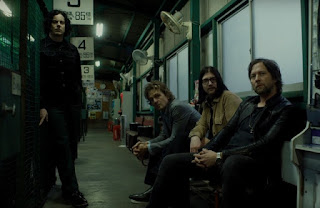 Jack White’s guitar work on the record, when unburdened by being the front man is some of his finest playing to date. He unlocks the emotional content of each song with deft choices regarding tone, empty space and internal energy. His touch in the song “Only Child’” dons sonic masks between the verses. His breaks concentrated, each note as important and vital as the next. White’s trademark guitar fingerprint can be found on the glass of aforementioned songs like “Sunday Driver”, and the feverish Detroit punk flashback “Live A Lie”.

The album screams by like a rock and roll locomotive, flashes of melody both familiar and not, influences play hide and seek from the darkened corners of Delta jukes and from the floral Mod clubs of Swinging London in the 1960’s. Brendan Benson’s soaring yet deceptively simple songwriting is the clandestine monarch of the group and album. Jack White’ s internal bruised and blue riff creator when collaborated with Benson’s melodic excursions result in straight rock no chaser, and beautifully crystallized ballads that swing from the dramatic to the mysterious. The diversity of the record hearkens back to the days when a complete musical offering must be digested and ruminated upon, as opposed to blasted out as a digital ‘focus track’ and then buried beneath the waves of the next ‘big one’ to follow. There is not one cut on the album which clues the listener in to what may happen next. Each song a world onto itself yet slotted perfectly into the context of the whole. Each track has unique features as well as sparkling elements within said features. Light and shade, acoustic and electric, punk and pastoral, resplendent and bluesy.

A welcome surprise nestled in the nooks of the grooves is the Raconteurs deep attentiveness to the vocals. Benson and White’s vocal blend has always been a blood relative match; and with Jack Lawrence now taking on a more substantial role in the vocals, tasteful three part harmonies abound. Spotlighting this epiphany is Side one’s closing number ‘Shine a Light’, the song White singles out as the one that floated to the top and screamed out, ‘I am a Raconteurs song’, to which Benson agreed. A song that again (I sense a theme here) takes beautifully disparate parts and blends them on a composers pallet before divulging the most beautiful of songs.

If there is any criticism of this collection is that it ends too quickly. This in part to the tightly wound explosives contained within. The album asks you to listen and then flip while putting down whatever electronic device you have in your hand as the music is just too important to miss. What the Raconteurs care about is artistic expression, storytelling and incendiary rock and roll. If you like magic tricks, slide of hand or music to ‘hear’ this record is not for you. On the other hand if you dig, melody, dynamic rock and roll instrumentation and a record that grabs you by the shirt and says, “Listen”, Help Us Stranger is the clarion call for you.


Help Us Stranger
Posted by talkfromtherockroom at 10:05 AM