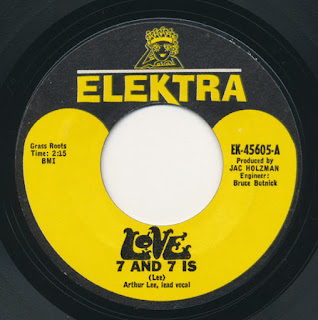 Playing today in the ‘rock room’ is a revolutionary, ‘proto-psychedelic’, ‘A’ side single from the summer of 1966. Recorded by the highly influential but not always mainstream Los Angeles group “Love”, the track, “7 By & Is” b/w “No. Fourteen” was cut over two days in June 1966 before charting in the Top 50 Billboard the following month. Later covered by a number of different band’s including but not limited to The Ramones, Alice Cooper, and Rush, the song is a punky garage stomp that differentiated “Love” from the typical groups of the time.

Arthur Lee’s phantasmagoric songwriting in addition to being an African American man fronting a mixed race group elevated “Love” to a musical place that gave them attitude, made them a bit scary and injected them an influence over a number of acts of the time including, the Stones, and the Doors. Ironically enough, the single “7 and 7 Is” was produced by Jac Holtzman and engineered by Bruce Botnick both well known for their future success with “The Doors”. 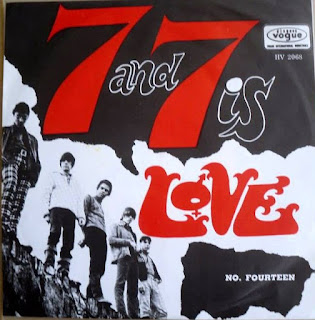 In addition to being released as a single, ‘7 by 7 Is’ was also featured as an album track on “Love’s” 1966 LP Da Capo. The song spotlights the lyricism of Arthur Lee’s young angst and topically references a love interest that also shared Lee’s birthday of March 7th hence the numeric reference in the title. The lyrics perform as a youth getting a better grip on his world while tinted through mind altering substances. If the voltaic track is not ‘rock and roll’ enough Lee’s shout of, “Oop-ip-ip oop-ip-ip yeah” at the end of each verse gives rock listeners  cry of“Womp bomp a loo bomp” just a taste of a hallucinogenic.

The song is grated from the speakers, an exposed skinned knee from falling on a hot gravel road. The drums a constant trill underneath a scrubbed electric rhythm punctuated by quivering lead guitar strums. Ken Forssi’s bass lends less of a bottom end and more off a guttural honk that contributes a lead aesthetic to the churning kinetic swell. The drums on the track are played by "Snoopy" Pfisterer according to the text “Forever Changes”. Rumor has it that he had a difficult time playing the marching band triplets on the track (30 takes) and Arthur Lee gave him one more shot before he told the drummer to find a new gig. The drums on the single are the result of Lee’s warning.

Lee’s vocals ooze attitude and the lyrics are slightly bedazzled with a psychedelic sugar. Typical to Lee’s style his lyrics range from pastoral and happily high to being delicately balanced on a razors edge of psychosis and psychedelia. His strength was not only unique melody, but instrumentation that ran the gamut of mystical flutes, squawking horns and crystalline guitars. 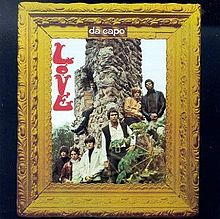 In the sung verses Lee’s lyrics are chanted matter of fact, made more urgent with substantial cymbal splashes. Following the 2nd verse there is no “lead” break, just a high speed chase through the wordless instrumentation where the undulating guitar track rises and falls. A heavily chorused count down prefaces what becomes a well-timed ‘rave up’ rising in helium fashion until detonating into a film soundtrack explosion. (In concert this would be recreated by kicking a reverb unit) As the detonation dissipates a delicate set of bluesy changes soaked in vibrato fade into the run out groove.
While Lee states that he is, “Trapped inside a night” the metaphorical explosion releases the anxious groove allowing the day to come to light. The ‘rock room’ feels this musical exorsist represented in the shaky departure played out in the fade.

For a 2:15 single by a non-mainstream act in the mid-1960’s, “7 and 7 Is” can be counted on as one of the formative tracks prefacing the upcoming “garage”, “psych” and home grown series of rock and roll bands to flower on the 1960’s. The track had been referred to as the first “punk” song by critics, but the ‘rock room’ asserts that this is too simple a label. The song’s naturally occurring attitude and instrumentation is a result of Arthur Lee’s coming of age through his music. Like anything forward thinking in the world of art, people will adhere a name to it in order to understand it. In the case of “7 By 7 Is”, it’s refusal to be classified is what makes it so influential and unique.

Posted by talkfromtherockroom at 11:23 AM 2 comments: