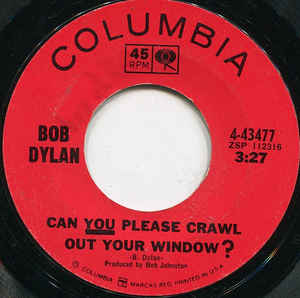 Released in the midst of arguably his most prolific era and recipient of the ‘thin wild mercury sound’, Bob Dylan’s 1965 single, “Can You Please Crawl Out You Window?” often slips into the recesses of Dylan’s compositional filing cabinet. Released on December 21, 1965 b/w “Highway 61”, the single featured not only another of  Dylan’s finger pointing lyrics but a deliciously funky instrumental backing by Toronto group “The Hawks” (later to be the Crackers, then The Band). Today in the ‘rock room’ I am listening to the original mono 7” single release which can also be found on the official 1985 Dylan box set Biograph.

Following 2015’s Cutting Edge box set additional versions of “Can You Please Crawl Out Your Window” made their way into the canon. Early attempts that pre-date the Hawks come from July and feature both Al Kooper and Mike Bloomfield are available as well as the complete Take 6 with the Hawks. Dylan's was not happy with the early takes thus resulting in the remake with the Hawks, minus Levon Helm and coming at the end of November.

Recorded on November 30, 1965 (though some Dylan scholars say October 5, prior to Helm's leaving the band) the single version features Dylan along with Robbie Robertson, Rick Danko, Richard Manuel, Garth Hudson and drummer Bobby Gregg. There has been debate regarding whether Levon Helm is on the recording. In the 'rock room's humble opinion it is not Levon on the single. The song would be the first studio song officially cut with the “Hawks”. The high octane R and R street savy Hawks glide through Dylan’s period specific wordplay and rhythmic posturing with hard looks and tough rhythms.

While critics are quick to point out the “Can You Please Crawl Out Your Window” is a lesser relative of other “put down” songs like “Positively Fourth Street” and “Like A Rolling Stone” there is no denying the confidence Dylan had in the track in addition to the vibrant instrumentation added by the fledgling “Hawks”. Though “Window” only reached number 58 on the charts, it still had an effect on music and musicians alike. Jimi Hendrix would perform his own version of the song in concert and on the BBC. He also admitted, according to Robbie Robertson that he loved the song’s central guitar lick and “copped” it for the Experience’s own version.

Lyrically the song is typical Dylan, insulting yet obtuse, just out of arms reach. The song could be about any number of Dylan fiends, associates or hangers on, but the ‘rock room’ agrees with the assumptions that the content could be about Edie Sedgwick. One gets the sense that the lyrics feature Dylan and/or the narrator inquiring with the female to empower herself against any or a specific domineering male (Andy Warhol). Alternatively, it could refer to any female in Dylan’s orbit who Dylan has been subjected to the narrator's or specifically Dylan’s own wounded ways.

"While his genocide fools and his friends rearrange their religion of little tin women". Dylan is commenting on the dynamics of an abusive relationship, either one he is witness to, or one he has taken part in. Proof is found in an additional stanza: "He just needs you to talk or to hand him his chalk, or pick it up after he throws it". In a fashion that is purely Dylan, we cannot be ever be sure of the subject or their connection to the author as the narrative is witnessed (in this case) through glassy eyes and sliced up imagery. 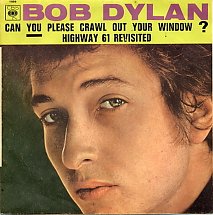 The instrumentation of the song plays like one walking a set of uneven steps following an evening of libations. The rough hewn groove of the “Hawks” and the deadpan delivery of Dylan create a sideways world revealed only after escaping from the lyrical room developed. Dropping the needle on the vinyl, the song begins with the golden ringing of a cymbal bell and Hudson’s blue streak Lowrey organ. Prior to the entrance of Dylan’s stony vocals a brief musical crevasse reveals Robertson’s strained and veiny guitar break leading into verse one. Gregg allows for musical coloring inside the lines with a rich 4/4 cowbell clank the plays through the song's duration.

It is here that the Dylan and the Hawks’ aesthetic reveals itself in all its quicksilver glory. Manuel’s piano rock and rolls out the chord changes while Dylan’s rhythm work is kinetic scribbling underneath Richard’s thumping left hand. The double barrel piano and keyboard attack swirl through the crooked window frame ajar. Gregg and Danko keeps the slanted verses delicately balanced with a honky-tonk groove allowing Dylan the freedom to undulate. Danko is especially active with ascending fretwork under each verse.

The Hawks hard driving R and B lays a sturdy foundation to which Dylan’s imagery morphs around.  Robbie Robertson strangles stringy notes from his Telecaster at each break between the verses. His playing lending a sonically stamped postmark to Dylan’s snide remarks. A major highlight being that Dylan's vocals are absolutely soaked in attitude. While the chords may be cut from the same cloth as "Rolling Stone", the dramatic approach by the Hawk's remodels Dylan's previous attempts. 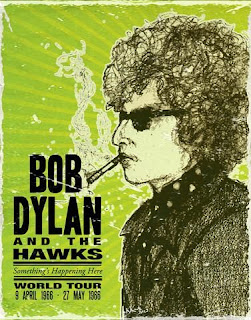 The famous oft-told story regarding the cut is when contemporary folk friend Phil Ochs was traveling in New York City with Dylan and composer David Blue when Dylan inquired about Ochs opinion of the song. Ochs prophetically replied, "It's ok, but it will never be a hit". Dylan in reply exploded on Ochs, telling him to "Get Out" while marking him with, "You're not a folksinger, You're a journalist!". It could take an entire volume to trace the dynamics of Dylan's tempestuous relationship with the folk movement, but in this case Dylan's high sensitivity to his art was teetered on a razor's edge.

Dylan's "Can You Please Crawl Out Your Window" was only a glimpse of the healthy vein of 'thin wild mercury music' to be mined by Dylan and his backing group from Canada. While the song exhausted what Dylan had found to be successful in 1965, it also allowed for Dylan and his group to explore their new relationship and its intricacies. This period of kinetic creation, high drama, black and white paper battlefields, and amphetamines and pearls is the stuff of rock legend. What cannot be mythologized is the music, and the deep creativity experienced and expressed by Dylan and his musical cohorts.

Can You Please Crawl Out Your Window?
Posted by talkfromtherockroom at 10:13 AM