Tools Of The Trade: Bob Dylan and Robbie Robertson's 1965 Fender Telecaster - "I'll Bring Over My Fender and Play All Night For You" 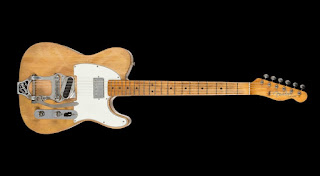 Today in the ‘rock room’ we examine one of the most ‘famous’ guitars in the annals of rock and roll history. Bob Dylan and Robbie Robertson’s 1965 Fender Telecaster traveled the globe, was cheered and jeered on the road while also being played on many of rock and roll’s most enduring recordings. While first played by Dylan, then Robertson, the guitar was also caressed by the hands of Eric Clapton and George Harrison throughout its rarefied existence. This guitar recently (2018) went to auction and sold for nearly a half a million dollars. The exorbitant sale price a reflection of the guitars historic importance. To quote Robertson, “This guitar has been on the front lines of so many phenomenal events”. 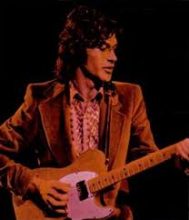 When Bob Dylan decided in the late summer of 1965 to take his electric music on the road following his legendary appearance at the Newport Folk Festival he started to put together a touring band. Once his decision rested on Canadian group “The Hawks”, guitarist Robbie Robertson took Dylan to pick out a stage guitar for him to play. Robertson was already playing a Telecaster in the Hawks, so it made sense that he recommend the same to Dylan. The duo decided on the 21 fret, black 1965 Fender Telecaster guitar, serial number L97811. The guitar’s body made of alder wood, its neck made of maple with black dot fret markers. The guitar’s date of manufacture is noted as June 3, 1965. The stock guitar had at the time both bridge and neck pickups, volume and tone control knobs as well as a three switch pickup selector.

Weighing just over 7 lbs, both Robertson and Dylan felt the guitar was perfect for touring and placing the guitar into Dylan’s hands gave Dylan and the Hawks a dual Telecaster attack for their upcoming performances. For Dylan’s purposes the guitar expressed a metallic scrubbing rhythm underneath the Hawks churning and swirling R and B grooves. Bob played the guitar for the entirety of his 1965-1966 World Tour concerts and studio sessions where it assisted in disseminating some of the most aggressive and creative rock and roll in creation. He used the guitar in Nashville for his recording of Blonde on Blonde, its attitude can be discerned when listening to the opening of “Leopard Skin Pill Box Hat” The live shows were confrontational and defiant, the Telecaster was an aural weapon of choice. The Telecaster’s journey had just begun.

Following the 1966 tour and Dylan’s motorcycle accident on July 29, 1966 both Dylan and the Hawks retreated from the road to work on music in the green hills of Woodstock, NY. In what would famously become the Basement Tapes, Robbie Robertson became the caretaker of the road tested Telecaster lending air and clarity to Dylan’s tramp through his folk past and his rock and roll present. In Robertson’s hands the guitar became the tool of the guitarist and colored both Dylan’s songs and the traditional readings in cutting and twangy recitations. Robertson coaxed soft swells and hard honky tonk riffs with his finger picked approach. It is the ‘rock room’s opinion that there was a degree of alchemy gained by the instrument during these times. The guitars diversity on the Basement recordings is stunning. 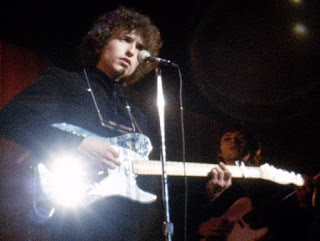 From the basement of Big Pink and into the near future, the Telecaster became Robertson’s gift. Transferred from Dylan’s hands to Robbie’s, the instrument’s voice would be heard on the Hawks (soon to be Band) debut, Music From Big Pink and would become Robertson’s instrument of choice through the next 6-7 important years before his touring instrument became a Stratocaster.
Robertson used the guitar for the Band’s debut concerts in April of 1969 (where it was still black), the group’s performance with Dylan at the Isle of Wight, right through the recording of the Band’s “Brown Album” and Stage Fright.

The guitar sung the licks for most if not all of the Band’s period pieces like, “Up On Cripple Creek”, “Stage Fright” and others. The Telecaster can be heard warbling through a Leslie speaker on “Tears of Rage”, or striking like a “viper in shock” on “Chest Fever”.  It can be heard slicing through the Band’s double keyboard set up on stage, and being strangled on rock and roll classics like, “Slipping and Sliding” or “Loving You Is Sweeter than Ever”. The guitar’s magic resonates, a combination of the players touch and the instrument’s internal fortitude. 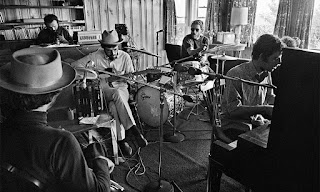 By the time the Band played on the Festival Express tour in 1970 Robertson had stripped the guitar of its black finish back to bare wood. Many guitarists during this time did this to their instruments to get a more ‘natural’ feel out of their guitars. (Clapton, Harrison, Lennon). Robertson also started to ‘mod’ the guitar to his own specifications by adding a Gibson PAF humbucking pick up in the neck position. Robbie has said in interviews that he was always looking for a better guitar but he just “couldn’t beat it (the Tele)”. He also stated, “Each incarnation of my hot-rodding this instrument seemed to give it a new life, along with a different creative surge”.

Robertson continued to use the guitar in studio and on stage through 1971.The next major event for the Telecaster came on New Year’s Eve of 1971 when Dylan joined the Band onstage for their encore. Dylan showed up with a Gibson SG to join the group for a few numbers. Robertson remembers that Dylan had tuning issues with said Gibson so Robbie reunited Dylan with his old ‘warhorse’ guitar and just like the old days Dylan scrubbed his way through a New Year’s set with his close pals.

Over the next couple of years the guitar remained Robertson’s main instrument including but not limited to the Band’s appearance at Watkins Glen in 1973. Eventually the guitar took a back seat to Robertson’s on stage Stratocaster which he started to use when the Band returned to the stage with Dylan in 1974 for reasons unknown.  That does not mean the guitar did not travel with Robertson nor was part of his arsenal. When Eric Clapton decided to join the guys on stage in Buffalo in 1974, the Telecaster was the guitar he was handed off of the rack. 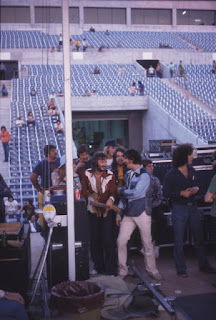 As the Band’s career began to wind down so did the appearance of the 1965 Telecaster. Robertson never let it go though, as it always remained an integral part of his collection and his inspiration. As late as 2000 Robbie fitted the guitar with a Bigsby B16 vibrato tailpiece, so his search for the sound continued up and into the new millennium. As previously mentioned it was only in 2018 when Robertson decided to part ways with the Telecaster with only one wish, “Whoever ends up with this guitar, you have to treat her with love”. The ‘rock room’ believes instruments need to be played and loved or they cease being instruments and become museum artifacts. The hope is that the 1965 Telecaster continues to provide aural gifts to whomever plucks its strings in the future.

Posted by talkfromtherockroom at 11:24 AM