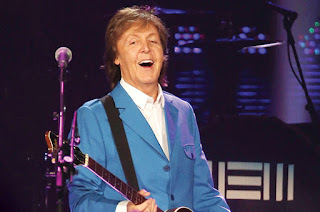 Playing in the 'rock room' today is a concert that I attended, Sir Paul McCartney’s highly anticipated and greatly publicized return at the Times Union Center in Albany on Saturday July 5th 2014. After cancelling a string of dates due to a virus McCartney had contracted overseas in May, the Out There tour’s new departure place became Albany, NY. McCartney fans were saturated with excitement as Paul assembled a 40 song, three-hour set that left no musical stone unturned, reaching into his plentiful Beatles, Wings, and solo catalog for a satisfying and awe-inspiring evening of music. I have a physical release Japanese import version of this event which I am reviewing for this article and is pictured below.

The diverse all ages and excitable crowd greeted the dapper McCartney, who was dressed crisply in blue blazer, with a massive truck rally applause. ‘Macca’s impressive and road tested group of musicians of the last twelve years (at the time) immediately ascended the opening bars of the Beatles hit “Eight Days a Week”, barely audible over the massive response from the audience. While McCartney’s voice may contain some nicks and dings from fifty years of rock vocals, similarly to an antique, its patina only increases its value and emotional strength.

The first ‘movement’ of the concert contained McCartney on famed Hofner bass as well as multiple classic guitars and his band electrically charging through a series of rockers spanning his career. The fuzzy  and well placed“Save Us” from 2014’s New, as well as famed Beatles tracks, “All My Loving” and “Paperback Writer” and Wings favorites, “Let Me Roll It” and “Listen to What the Man Said”.

"Listen to What the Man Said" was a wonderful addition to the set and sated the musical appetite of the Wings fans in the crowd. Prior to "Let Me Roll It" Macca removed his jacket to great applause revealing a sharp undershirt.“Let Me Roll It’” featured a slightly extended and rocking “Foxy Lady” jam in which McCartney showed off his ample soloing abilities on his multicolored Les Paul. It's always  McCartney spoke early and often, telling tales familiar to tour veterans, but awe-inspiring to first timers. McCartney has the innate ability to make a large venue feel like it’s a living room through his interactions and personable explanations of his songs. 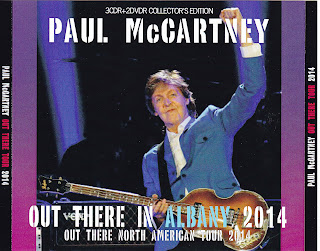 The crowd was given a brief respite at this point in the proceedings so McCartney move to the grand piano for a series of  his most substantial songs. The recent paean to his wife and Upstate native Nancy Shevell  “My Valentine” was a fitting cool down period, to be followed by a stomping version of the Wings rarity “1985” and then knocked out of the arena with the dynamic duo of “Maybe I’m Amazed” and “The Long and Winding Road”. McCartney cooed in a sweet falsetto, stroked the black and whites through every climax, and illustrated why he is the definitive performing rock artist in the world. Reflecting on the recording I feel lucky to have attended this musical spectacle, and looking at the circulating footage, so did everyone around me as they are statued in rapt amazement.

Paul McCartney concert experiences not only reveal  his catalog of amazing and enduring compositions, but also spotlight his prowess on multiple instruments and in variegated contexts. An acoustic set followed next with the band joining in on tasteful backing for most of it. But most importantly the set also found McCartney standing solo on an ascending platform for “Blackbird” and his always stirring tribute to John Lennon off of 1982s Tug of War, “Here Today”. Highlights were the perfectly fitting and purely ‘Macca’  composition“On My Way to Work”, which made its live debut during this segment to great effect as well as a china-doll-delicate reading of the Beatles, “And I Love Her”.

Returning to the full band format, McCartney’s psychedelically painted piano was placed at center stage for the two power tracks on 2014’s LP release New. A bounding version of the title song was played as well as a sturdy rendition of the regal “Queenie Eye”. Both songs illustrated how McCartney’s recent compositions nestle into the current of the set list next to his greatest songs, a testament to his longevity and unmistakable talents. And while 'new' songs may be hard to listen to in the context of a concert for some, for the 'rock room' the current cuts were confirmation of McCartney's continuing connection with the muse.

Following the musical stare down with “Queenie Eye”, the juicy central section of the concert revealed a series of Beatles tracks, many rare and all enthusiastically played by the band and beautifully received by the audience. Each song stacked on top of the next, raising the temperature and elevating the applause. Beatle tracks “Lady Madonna”, “All Together Now”, and the rarely performed “Lovely Rita” played in conjunction with every set of hardcore Beatle fanatic lips in the venue as they mouthed the words. "Lovely Rita" was especially gaudy and spotlighted some of McCartney's finest vocals of the evening.

The highlights continued with McCartney breaking out the arsenal of Wings most beloved songs intermingled with more Beatles! “Being For the Benefit of Mr. Kite” was incredible; McCartney’s rotund bass line pulled from the grooves of Sgt. Pepper in a legendary display, a reflection upon his instrumental innovations and ground breaking ideas. A tribute to George Harrison with a poignant version of “Something” began on solo Ukulele and concluded in a full band tribute. Stellar versions of “Ob-La-Di Ob-La-Da”, “Band on the Run” and “Back In the USSR” followed, peaking with the concluding “Live and Let Die” and “Hey Jude” finale. Explosions, lights, strobes, multimedia clips, banging instruments and sing-along smiles filled the concert’s concluding moments in disorienting joy. 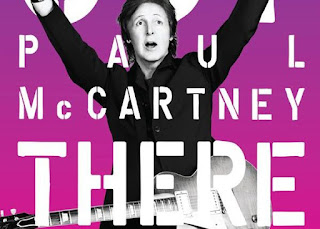 Just when you thought the 72-year-old McCartney and powerhouse band couldn’t possibly give any more to Albany, NY, they come out with two encores and a wedding proposal on the stage. The first encore was the perfect blend and a nod to the heads in the audience hailing from the ’60s and right up to the present day converts. “Day Tripper” and “Get Back” thematically sandwiched a rare and roaching “Hi, Hi, Hi”, an incendiary concert favorite from ’70s Wings performances. All the windows were down and the band had the pedal to the floor for this first set of encore numbers.

The second encore found McCartney on golden acoustic for a performance of “Yesterday”, expected, yet still magical. Following this performance, a Rochester, NY couple was engaged on the stage, with McCartney inviting the couple up due to their enthusiastic and persistent waving of signs in the audience. Their plan worked and added up to a special and unique concert moment with the future groom singing a verse of “When I’m 64” with backing from the band. This dream moment for the couple was followed appropriately with a death-defying slide downhill into a threatening “Helter Skelter” by McCartney and band.

The final and unbelievable conclusion to the concert came with a flawless version of the triad of songs closing the Beatles 1969 LP Abbey Road, “Golden Slumbers”, “Carry That Weight”, and fittingly “The End”.  The conclusive moments found McCartney expressing with deep gratitude and warmth the parting lines of the concert, “And in the end, the love you take, is equal to the love you make”.

Paul McCartney’s performance at the Times Union Center was a memorable and, I would say even, historic experience. The wealth of quality music, the lack of unpretentious stage antics and the genuine feeling of enjoyment emanating from the stage made the show an evening worthy of long-term reflection. The anticipation of a rare Upstate New York appearance,  in addition to answering the questions surrounding McCartney’s ability to tour, layered the concert in pretense. McCartney, like always, delivered, silenced critics, and gave his admirers reason to celebrate. There are not nearly enough superlatives available to be applied to Sir Paul McCartney and his continuing artistic growth, unbelievable concert experiences, and musical achievements.

McCartney Albany 2014
Posted by talkfromtherockroom at 10:58 AM