Take One: David Bowie: Sue (Or In A Season Of Crime) -Endless Faith 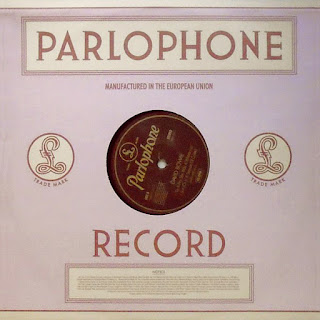 Spinning in the ‘rock room’ today with a touch Fall in the air is David Bowie’s first new musical (at the time) composition since 2013’s The Next Day. The adventurous single “Sue (Or In a Season of Crime), is a seven-minute jazz epic with the 17 piece Maria Schneider Orchestra. The song was originally featured as a new addition to the forthcoming Bowie Nothing Has Changed compilation. The song vocally elicits images of Tim Buckley’s atonal late-1960s albums more than anything from Bowie’s previous work. Instrumentally the song flows over rocks and flashes imagery across an aural silver screen through punctuated horn lines and orchestrated counter melodies.

Opening with water drenched swells and sensual horn blasts, “Sue” moves kinetically on erratic teletype percussion. In contrast, longing horns and an elastically crooned melody line react to each other like to repellant magnets. The track breathes with an internal pulse of a stand up bass. Bowie is in great throat, and enters into hand-to-hand combat with the swelling horn punctuation's. When his vocals dissipate, it’s all about the racing jazz kit and blowing newspaper brass.

The song’s rhythm continuously drops in and out of consciousness, disorientating the listener and detaching then from the song proper to dip them into unknown aural mysteries. The sounds fell like Bowie has stirred his eternal pot of influences into one cerebral and cinematic display. Miles ends up meeting Frank Sinatra, who then rings up Frank Zappa, as this multifarious compositional display unfolds. 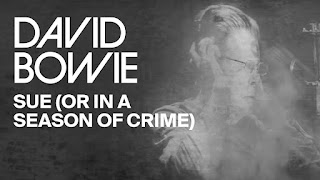 A sinister theme develops in the lyrics. Is someone helping or hurting? Has the narrator given up and committed the ultimate crime? The claustrophobic orchestration drops away leaving cinematic swells and brisk snare work at the point in which the narrator finds Sue’s note. Bowie moans in spooky omnipotence Chaos ensues, the horns moan Bowie’s melody line before submerging into a dizzying array of rising bubbles. It is in this sparkling drift that the remainder of the song sinks to silence.
A promotion video for the track can be found here, a gritty urban film noir representation of the song.

The cut would later be re-recorded for Bowie’s final studio LP, 2016’s Blackstar featuring as an album track.On this version from the album, the loose jazz improv is been reigned in to a tight pocket where the central pulse is played by electric guitar. A number of substantial peaks roar with white noise swells and static following each Bowie verse. Spectral drones and moaning glacial keyboards wash Bowie’s haunting vocals in. Bowie reached differing levels of menace in both versions of the song, a testament to his continued creativity even in his later recordings.  Both of the versions reveal an aural personality aspect through their unique explorations.

Once again, David Bowie had given his fans a unique and inexpiable musical statement that holds onto no preconceived ideas or past glories. “Sue” was an amazing precursor to what the reclusive legend had percolating in his mind for his next and sadly final move. Obviously, Bowie’s work was still leaving all possible labels and descriptions behind and reaching for new compositional vistas.

Posted by talkfromtherockroom at 10:42 AM

Email ThisBlogThis!Share to TwitterShare to FacebookShare to Pinterest
Labels: 2014, Blackstar, Bowie, David Bowie, jazz, Nothing Has Changed, Sue, Sue (Or In A Season OF Crime), Tony Visconti