Now Playing - The Grateful Dead - April 3, 1982 Scarlet Begonias->Fire On the Mountain – “Loose On The Town” 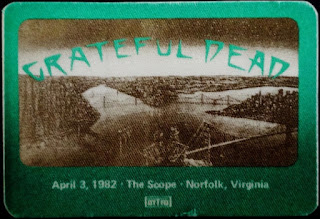 Now playing in the ‘rock room’ is the second set opener from the Grateful Dead’s April 3, 1982 concert at the Scope in Norfolk, Virginia. The Grateful Dead’s 1982 spring tour had begun with a rough and rockin’ show the evening before in Durham, NC, but this particular evening in Norfolk was a completely different affair. The entire show has a hallucinatory vibration that permeates the proceedings and lends the performance one of those rarified airs that tell the attendee and listener that it’s going to get stranger. The second set opening 25 minute “Scarlet Begonias-> Fire on the Mountain” is proof of this statement. The duo is a unique rendition featuring a particular segue between the songs and spectacular playing by all involved. For people that are into this sort of thing, this is also the Grateful Dead tour where Jerry Garcia and Phil Lesh changed sides of the stage (the evening before). This factor could also be one of the reasons for the deep musical connection between Mydland and Garcia on this night.

I am listening to the wonderfully dynamic Bob Wagner/Charlie Miller audience recording as I write this rant. There is a Miller soundboard also available to enjoy, but in the ‘rock room’s’ humble opinion the Wagner is the way to go. The soundboards, especially from this era are terribly sterile, but the power of this performance nudged me to check it out as well.  As I stated above one can feel creativity in the air as the opening set of the concert spotlighted a well improvised “Bird Song’ and a crushing closing version of “Let It Grow” setting the table for the aural feast to follow. I was not planning on reviewing anything today let alone the whole show, but the stunning second set opener changed my plans for the afternoon.

“Scarlet” begins the second set with a smoky feel, slowly ignited like the rich oils of an incense stick. Brent Mydland washes the groove with thick Hammond organ swells and once Garcia enters with the vocals the tempo increases and the band is immediately locked in. Garcia is singing well and the band is fully invested in the medley.

The mid song Garcia solo is super fine, with Jerry taking five spins around the melodic track, culminating in a finale of bubbly scrubs. His melodic prowess on full display. Following the final lyric, the band quotes the “Scarlet” theme with Mydland in particular inflating the jam with airy key strokes. Garcia sets the tempo with lush strums revealing the pair of song’s rich and creamy center. Mydland again quotes the “Scarlet” theme under the percolating band before disassembling it into an array of crystalline fractals. Garcia’s plump tone is blue and icy, while the ambiance of the room comes through clearly as Garcia probes the landscape with prickly fret work. Weir works his neck as well with jittery strums that underpin Garcia’s fingers. The drummers work their cymbals and toms in conjunction increasing the groove while Lesh plays hide and seek underneath the rhythm. Lesh comes through on headphones much clearer, with both the audience and soundboard recordings unfortunately being a bit light on the bass. 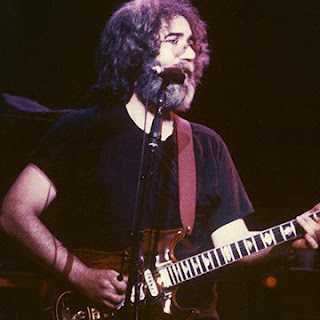 At 9.5 minutes the band begins to coagulate. Garcia and Weir hook arms as Jerry finds something he really likes. Garcia hits the tickle spot and repeats, then adjusts, repeats and explores some more before knocking on the door of a danceable groove which he touches on before continuing on with the exploration. Weir is stunning in his clairvoyance, taking off ahead of Garcia before landing right next to him seamlessly. At a bit past 10 minutes Garcia settles into orbit, covering the song in a thick blanket of stars. Brent and Weir circle with him, folding the segue over onto itself. Garcia keeps lowering the jam, not in tempo but in dynamics, Garcia becomes a psychedelic clock, tic-tocking in slowed time. The crowd knows something is up and can be felt on the audience recording buzzing along.

Off on the distant horizon “Fire on the Mountain" waits, but it cannot yet be felt. Garcia blows on the embers hoping for flame, at 12 minutes he has taken the tune to no man’s land, where everything hangs in the balance. At around 12:30 the jam almost reaches silence whereas Weir, Brent and the drummers join Garcia in a plucky euphoric space. Destination has been reached and the firewall has been breached. The weightless circular Garcia riff wears off its edges while gaining traction. The melodic friction helps to mitigate a groove. Garcia then tickles higher on the neck waiting to feel the warmth from his musical embers while the beat boils. “Scarlet” is quickly quoted like a streetlamp passing by a car window, Mickey then slams a floor tom, Phil slides up his bass neck and the new fertile land between “Scarlet” and “Fire” has been discovered. Seamlessly the band gathers around the substantial mountain flames and “Fire on the Mountain” begins.

Similarly to the entire evening’s performance, Garcia continues his streak of pulling clandestine and unique melodies from a familiar structure. Lesh is now fully amped and very active and leads the way toward the incendiary summit. The first “Fire” solo is brassy and full of honk. By the final solo, Jerry plays with a clean tone while adding the filigrees and additional licks that always make a ‘normal’ reading into a special version. The rest of the concert follows in kind with a well played "Estimated->Eyes" to follow and a hearty post space "NFA". 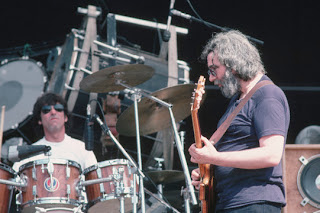 For the Grateful Dead spring tour 1982 was an era where Brent Mydland had been fully assimilated into the group mind. While not a time as recognized as something like Spring 77, the period holds a number of unique and powerhouse performances. ( See: Hartford and Baltimore) While the Grateful Dead in the 1980's were heading toward bigger venues and larger internal problems, they were still able to access the gestalt linkage on lucky nights. In every Grateful Dead performance there is something unique to be discovered; and in the spring of 1982 these moments often occurred every night.