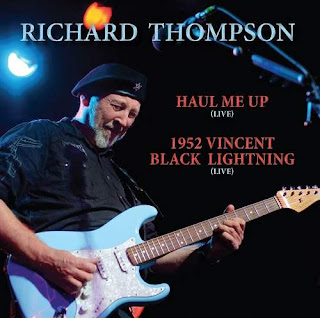 Accelerating from the speakers of the ‘rock room’ today is a song that was listed by Time magazine as one of its “All Time 100 Songs”. The song was birthed as a nondescript album track on Richard Thompson’s 1991 LP Rumor and Sigh and in the intervening years has become one of his most beloved cuts. The tune has since been covered by a plethora of artists and admirers including but not limited to Del McCoury, Jim Henry and Bob Dylan. If Bob Dylan covers one of your tunes, I think it's safe to say you have made it as a songwriter. For Thompson, the song is a concert staple up through this day requiring only himself and an acoustic guitar.

Thompson’s songwriting has always been and continues to be full of dark imagery and magical accompaniment; in many ways this song could be viewed as a fitting culmination of all of his career successes. Thompson deftly conjures mystery from both pastoral and suburban landscapes, he pulls from both conscious and subconscious narrators. It’s an unknown commodity to understand the connection between a song and its developed audience. While there is no doubting the diverse and inspired amount of music Richard Thompson has made throughout his career with ‘Fairport Convention’, Linda Thompson, and as a solo artist, the song ‘1952 Vincent Black Lightning’ was a flash caught in a bottle and has become a Calvary cross for the career of Thompson.

Thematically the song encapsulates, myth, sexuality, attraction, and danger in a glistening chrome package of steel strings. Thompson prior to a performance of the song described it as, It's a simple boy meets girl story, complicated somewhat by the presence of a motorcycle". By using an “object of myth” like the unbelievably rare 1952 Vincent Black Thompson taps into every young man’s psyche of Thompson’s time, or actually of any time. Only a handful (31 total) of the unbelievably fast bikes were manufactured and one can assume the legendary machine made quite an impression on the young Thompson. As an aside, recently (2018) one of the motorbikes sold for $929,000 US dollars. A red headed girl, a bike, leather and a series of crimes performed to get said bike inject the song with a cinematic romance that permeates all of Thomson’s compositions but in this particular instance, bleed out in Technicolor.

The song begins with Thompson’s recognizable hybrid picking (also called Travis picking) resplendently sparkling like a sun kissed highway. Thompson plucks out the central riff as one of two protagonist's ‘Red Molly’ sees James and his bike of the first time. It must be noted that in addition to the compositional majesty of this song, please watch Richard play it live HERE to understand and grasp the virtuosity on display to develop the central riff of the tune. For guitar players witnessing the fret reach of Thompson’s nimble fingers is awe inspiring enough. 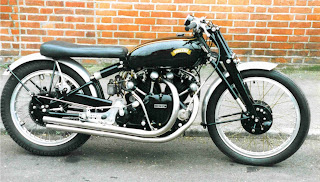 James and Red Molly share an attraction that is consolidated with the Vincent. With minimal internal relationship details revealed lyrically, the music assists the narrative with Thompson’s dark deep oil vocal pouring out emotion at the end of each stanza. James promises via a ring to ‘Red Molly’ that his prized possession will be hers someday as the implication that she is the only love true enough to be gifted his Vincent.

Conversational in tone, dramatic in feel the song takes the listener around hair pin corners. It flies past in a blur with guitar and vocals wind swept in inspiration. Mid song Thompson separates the verses with a dramatic string stretching that diverges from the normal picking of the song. The lovers are quickly torn apart because of James checkered past (he had been robbing since age 17 to get his Vincent) when he takes a shotgun blast to the chest. Dramatically the music increases its intensity transparently as the narrative reaches its crux. You’ve heard the famous adage about speaking about music is like dancing about architecture, well in this case the ‘rock room’ will be quiet and let the song sing for itself.

In current performances the song has rounded off the rough edges found in early renditions. During one concert from 2002 referenced on the Richard Thompson discussion site RT List, it is stated that one lucky crowd got to hear additional lyrics not contained on the studio version of the song. Thompson referred to the ‘missing’ lyrics as the ‘nuts and bolts’ of the song. The lyrics were transcribed as follows:

Reported as following opening verse:
Says James this Black Lightning is a fine pedigree
On the Bonneville Salt Flats in the hands of Rollie Free
A factory model not rebored no tricks
The speed always steady on 146
They smashed through the land speed record that day
So I just had to have my own come one May
So you see it's a matter of some pride, that Vincent is the mark that I must
ride

Reported as following the final verse:
Well Molly stole his body from the hospital bed
Said we'll give him a decent burial yet
They cremated him out in the dark cold rain
Then they stripped his fuel tank right off the frame
Then they poured in his ashes as the (unknown word) flowed
I buried him there with a view of the road
And even the hard men cried
And forever on his Vincent he rides
The ‘rock room’ has been unable to find a version of the song with the aforementioned lyrics performed. If you have one, please let me know! One additional aspect that makes Thompson’s live versions unique is the lyric where he sings three makes of motorcycles that, ‘don’t have a soul like a Vincent 52’. Thompson likes to plug in a number of different bikes that fail to reach the standard of the Vincent, famous makers such as, Ducati, Harley, and Triumph. 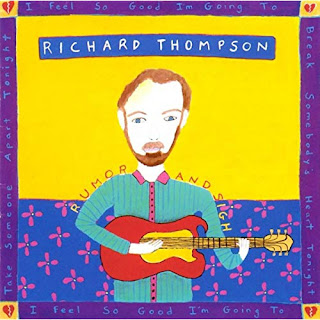 With such a bottomless musical well of pure English inspiration, to focus on one Richard Thompson track seems a fool’s folly. Regardless, “1952 Vincent Black Lightning” is only one tree poking its head above a lush green canopy of melodic treetops. Richard is a treasure for a myriad of reasons, his unique native voice, his guitar playing fingerprint unlike any other, and his ability to turn out an original tale. The aforementioned factors that make him wonderful, are also the reasons he has dodged ‘mainstream’ popularity, all the while remaining true to his muse.

Posted by talkfromtherockroom at 5:01 AM