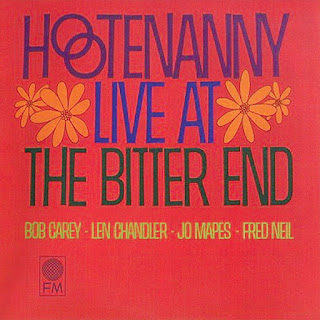 Revolving in the ‘rock room’ today is an obscure mono folk record from the FM label released in 1964. The LP titled, Hootenanny – Live At the Bitter End spotlights a number of artists from the heady days of the Greenwich folk scene which included familiar artists like, Bob Dylan, John Sebastian and the focus of today’s ‘rock room’ rant, Fred Neil. Famously known as the composer of the song “Everybody’s Talkin”, Neil towered above the majority of artists that passed through The Bitter End as is illustrated on the record. As famed critic Richie Unterberger stated in his review of the LP:  “All of the other performers sing sincere, twee coffeehouse folk that illustrates (if only in retrospect) just how necessary it was for gutsier artists like Neil to come along and blow them out of the water”.

Neil performs three songs (hailing from 1963) on the record in his far out folk blues fashion. Leading on strident 12 string acoustic guitar, Neil with unknown backing musicians (on bass and harp respectively) ties everything together like tightly knotted rope. No disrespect to fellow artists featured on the record, Bob Carey, Len Chandler and Jo Mapes, but when the record is played in its entirety it is obvious to the ‘rock room’ who is the timeless talent. Prior to Neil appearing on the Hootenanny record he had released a number of rare singles (1957-1960) while quickly falling out of the ‘Brill Building’ school of songwriting. Following Hootenanny, Neil would record the influential, Tear Down the Walls record with fellow folkie Vince Martin and later following with four of his own solo recordings.

The first of three Neil songs on the record is “Linin Track” recorded by Huddie Ledbetter. Neil sits in the lead engine car initiating the groove. Neil states, “I heard that all Bitter End people have rhythm” as his wiry 12 string scrubs rock into a unique folk blues groove. “Linin Track” rises like locomotive steam as it races down the track. Neil is accompanied by as previously stated an unknown bass player who thumps out a mantra on the standup. Neil starts off the song with his ethnic box car chording. The strident and seductive percussion less rhythm expands and contracts as Neil bellows over the top of the rocky churn. His hearty voice elongating the verses and deep diving into the lower register. Midway through the song and through the musical smoke Neil shouts, “Here We Go” as he initiates another round of fibrous riffing. “Linin Track” languidly veers off course and segues seamlessly into “Grizzly Bear”; a 1962 single for Jake Scott which was co-written by Neil. 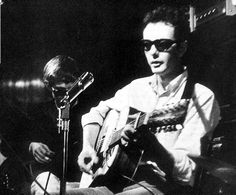 Neil begins to shout out the lyrics and then the dynamic call and response chorus to “Grizzly Bear” while requesting that Village singer/songwriter Major Wiley come on stage and assist with the lyrical echoes. Rolling down the mountain and through the briars and brambles Neil gets the “Bitter End” and Major to collaboratively get down. Neil brings the chunky groove lower and lower until concluding the “Linin Track’ bookend with a reprise. The crowd responds loudly and the vibe is bright.

The next track on the LP, “Sky Is Falling” is a Fred Neil original that never made it on one of his official LP’s.  Here again, Neil is joined by an unknown bass player who lends a warm walking bass line to the track. Neil precipitates a ticklish acoustic prelude before beginning the lyrics with his irresistible golden tenor. Neil croons his unique brand of blues, contemplating the falling sky and the eventual world “fall out”. Loose and intimate the song levitates between earth and sky, delicately balanced on Neil’s internal syncopation. Neil really huffs and puffs on the golden horn for the last verse as his voice hits spots where the listener can ‘feel’ it.

Neil introduces the final song on the album as, “another work song I learned from Bobby Dylan”. A humorous aside as Dylan actually backed Neil at the “Bitter End” in 1961 and they often traveled in many of the same Greenwich songwriting circles. “That’s the Bag I’m In” follows and is a Neil original that would later be recorded on 1966’s self-titled album Fred Neil.

A ‘rock room’ favorite and a Fred Neil classic, “That’s the Bag I’m In” begins on a circular fingerpicked lick and lists a litany of “shit happens” moments to our narrator. He immediately burns his fingers on the coffee pot and misses his connection amongst other unfortunate daily events. Eventually, “same thing gonna happen again, cause that’s the bag I’m in”.  The version here is a bit faster than the eventual studio recording with a kenetic strumming pattern. Another unknown musician joins Neil, this time on harmonica. I will throw it out there that I believe this spectral player to be John Sebastian (who often played in the Village and with Neil). Neil states to the player, “Get the bag” as both he and Neil accelerate the tempo and enter into a guitar/harp run through the changes. Connecting the dots and dressed with off mic asides, Neil sings the opening verse again to conclude the song with some gritty gusto on the exiting words. 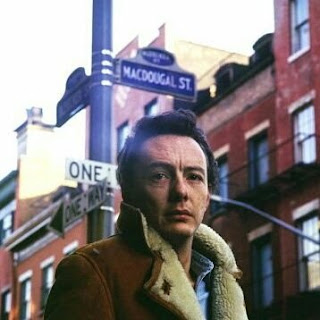 In the ‘rock room’s meaningless opinion, Fred Neil is one of the finest songwriters to be birthed from the early 1960’s coffeehouse folk “hootenannies”. While some of these talented artists became bigger than they could ever imagine, some like Neil have not even been given the benefit of hindsight. Obviously his compositions such as “Everybody’s Talkin” and “Dolphins” have endured and influenced over the years, yet the man is still underrepresented. David Crosby, Bob Dylan, Tim Buckley, John Sebastian and Joni Mitchell are only a few of the famed and talented songwriters whom were assisted or inspired by Neil. Full scale musical acceptance would allude Neil for his entire life but he would contribute to the world in other ways. Neil would slowly retreat from music and head for the deep. His work with ocean and dolphin preservation would become his calling and he would leave an indelible mark on it just as he had as a songwriter.

Posted by talkfromtherockroom at 8:48 AM