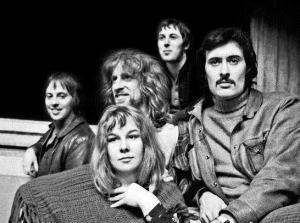 Now playing in the ‘rock room’ is a vibrant and rare 17 min color clip of ‘Fotheringay’ filmed in October 1970 for the German Radio Bremen television show Beat Club. ‘Fotheringay’ for those unaware was the band Sandy Denny put together with husband Trevor Lucas following Sandy’s departure from ‘Fairport Convention at the end of 1969. Live footage is at a premium for Sandy and thankfully this performance finds Denny at an amazing peak as both a writer and a performer. The rhythm section of Pat Donaldson and session drummer extraordinaire Gerry Conway are as tight and in the groove as the watch pocket on a vintage pair of Levi’s. Comprising the rest of the group is as previously stated Sandy’s future husband Trevor Lucas on acoustic guitar and astronomical Telecaster player Jerry Donahue. While when originally broadcast on November 28, 1970 one track (‘Nothing Was Delivered’)was shown, now, (as of 2015 when the box set Nothing More: The Collected Works was released) we are able to enjoy the entire performance.

‘Fotheringay’ was the result of the close knit nepotism of the late 1960’s and 1970’s British folk community. Following Denny’s decision to leave ‘Fairport Convention’ to play with her boyfriend, the result was one fine studio album, a few wonderful performances, some unfinished tracks and this excellent television broadcast. 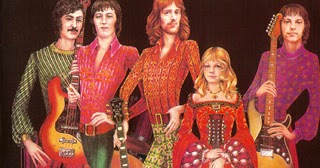 The available color pro shot footage begins with the circular patina piano of ‘Nothing More’. The song according to Denny biographer Clinton Heylin was composed about legendary guitarist and oft-band mate of Denny, Sir Richard Thompson. Long lush acoustic strums and Donahue silver threads of melody drape themselves of Denny’s piano like discarded undergarments. Donahue’s swelling resonance of the lacy verses is of particular note. Denny, speaks to the protagonist delicately, probing their emotions, wishing to see the ‘pearls’ that he hold so close that no one will ever know. Her ancient winter maple throat is unwavering and drips rich drops of sweetness throughout her deadly serious inquisition.

Musically the song dramatically fractals into moonlight through stained glass. Denny’s voice is haunting, yet steady through the developing musical storm that gains turbulence as the song cuts through emotive waters of melody. By the third verse the song floats inches above the ground, Donahue weaves around the internal euphony before taking off into an icy clean recitation of Denny’s words. Denny’s face is framed by fire, she glances over the top of the piano as the drums drop away leaving the final verse to be sung over a sparse sparkling musical sky. 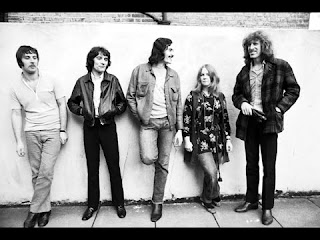 The next track to follow finds Sandy standing in her flowing gown with microphone as the band organically plays the sneaky introduction to ‘Gypsy Davy’. A traditional song (arranged by Denny) that was never officially recorded by ‘Fotheringay’, here it is played with a subtle power and a rooted ethnic aesthetic. Denny sways unintentionally seductively with eyes closed as she sings the first verse the music visibly taking her away. The documented Anglo American narrative is of a noblewoman who desert her high standing in life to run away with the poor gypsy she loves. In ‘Fotheringay’s’ capable hands the song becomes a towering knotted tree, standing timelessly and straddling the musical border between rustic and contemporary. Donahue’s guitar stings the central melody with deft filigree’s of gold leaf as the able rhythm section cooks over an open fire with a particular groove that defies description.


The dramatic epic ‘John the Gun’ follows next along with Denny’s return to the piano. Recorded during sessions for the unreleased second ‘Fotheringay’ record and later rerecorded for Denny’s The North Star Grassman and the Ravens solo debut the song is in the ‘rock room’s’ opinion on of Denny’s finest. Beginning with a lick that sounds like a high speed rocker, the song proper then gets its hammer cocked and drops into the verse with a metallic down stroke from Jerry Donahue.  Denny dramatically sings the narrative with a serious yet plaintive attack. Conway punctuates each line with large splashes of cymbal work. The substantial chorus is vocally collaborative with all hands on deck leading to Donahue’s slippery silver solo spot. He takes two rounds with deft string bends twisted like molten metal.

The story of “John the Gun” is a tale of life and death, the song is eerie, grave, and feels as the cold steel of a gun. The track is a unique Denny original which elicits traditional song. “John the Gun” plays the games of war which takes young lives because he himself was the loser of said games. Denny, melodically and lyrically winds these ideals tightly around Fotheringay’s instrumental loom until rich golden twine is produced. On stage, Sandy is lost in her muse, staring into the creative distance, enveloped in song. 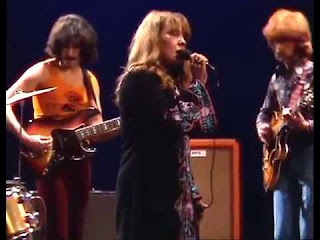 The criminally short performance concludes with a cover of Bob Dylan’s ‘Nothing Was Delivered’. Sung by Lucas, here the song becomes a lush mossy slab of ‘Celtic funk’. Conway’s drums and weighty double kick drums hits advance the song’s natural groove. Donahue stretches some rubber banded twang from his Tele, with well-timed string bends that pop with a rustic attitude. Lucas’s straightforward vocalization fits the song hand and glove. With the conditions that Dylan originally composed the song in Upstate New York in 1967, the ‘rock room’ asserts that of the many covers of this tune, ‘Fotheringay’ puts their spade in the dirt and reveals the heart of Dylan’s intent. Regardless of ‘Peter, Paul. And Mary’s ascent of the charts with the composition in 1967, this one is tough to beat.

While unfortunately short lived, ‘Fotheringay’ was a well-timed expression for Sandy Denny, and a band of soft comfort for her fragile psyche to develop her songs. While this brief creative endeavor neither moved the earth nor traveled across the seas, the songs remain. The band for the time was of one mind, longing to express their shared love of folk and traditional music by swirling it into a uniquely original tincture. While the group would fracture, the individual members bonds would remain and they would mix and match over the short years left for Denny. This special footage of ‘Fotheringay’ at the Beat Club 1970 should be treasured and enjoyed by those who witness it.  It’s a lucky star that it even still exists and luckier still with the minuscule amount of celluloid tape available to fans and critics alike.

Posted by talkfromtherockroom at 12:38 PM