Put The Boot In: Janis Joplin and Jorma Kaukonen - The Typewriter Tape 1964 - "Candy When I'm Good" 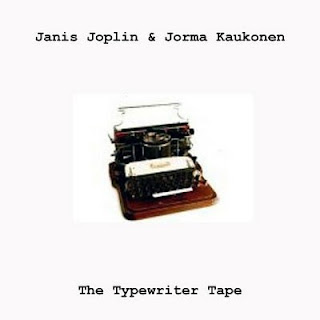 Today in the ‘rock room’ plays a legendary and unique recording, famed in the ‘bootleg’ world for both its rarity and performance. On July 25th 1964, smack dab in the middle of the turbulent musical madness sweeping across the United States two folkies from different worlds met in an apartment in Santa Clara, California for a practice/jam session prior to both of their respective performances at San Francisco’s ‘Coffee Gallery. That afternoon Jorma Kaukonen turned on his tape recorder to capture both his and fellow vocalist from Port Arthur, Texas Janis Joplin’s 20 plus minute rehearsal capturing in the ‘rock room’s humble opinion one of the most important aural rock documents to ever circulate. The ‘Typewriter Tape’ as it would become known, found these two giants of the San Francisco scene and rock history exploring their influences, abilities in the privacy of Jorma’s apartment. In the close background Jorma’s Swedish wife Margareta types a percussive letter home in the electric ambiance. Six songs circulate on the recording Kaukonen made that summer day, Jorma has stated that there were other songs taped, but they have not made it out to the general listening public as of the writing of this rant.

San Francisco in 1964 was home to a number of traveling musicians and wayward youth like Jorma and Janis, looking for direction and driven by their art. Names like Jerry Garcia, who was a well-known banjo player and guitar teacher and Paul Kantner (who would soon meet and team up with Jorma in Jefferson Airplane) were filling the folk clubs and playing jug band melodies. Within a year from the aforementioned “Typewriter Tape”, the folkies mentioned previously, in addition to groups like the ‘Byrds’ and Bob Dylan himself would plug in electric instruments and the sepia toned folk musical landscape would be decorated with a sunrise of a thousand colors and visions only previously witnessed in dreams.

Back to the recording at hand, at this time both Jorma and Janis as well as a host of other musicians made their way to the ‘left coast’ for a way out of the straight edged expectations of the ‘American Dream’. These talented musicians had made the decision that they were not going to live the life of their parents. Janis left her deeply conservative live in Texas where here separatist vibe made here an obvious candidate for defection. Jorma, moved many times as a youth as a child in a military family, and learned a appreciation for the blues early in life. By the time he attended college out west he was quite the purist in the ways of folk and country blues. Both musicians had acquired a deep understanding of the blues aesthetic even during their formative times, but what is more than obvious from the vibe of the tape is that it is clear that both are destined for greatness.

Kaukonen plays what sounds like a hollow bodied electric guitar and Janis sings the shit out of the five covers and one original on the tape. The recording plays like an Alan Lomax field recording from a back porch in the South. The attitude is so substantial and the talent so undeniable, this is one of those tapes that is so good I feel guilty listening to it. The quality is more than reasonable with the guitar and voice audible as well as the typewriter and Jorma’s boots on the hardwood floor.

The cassette/reel opens with the blues vaudeville standard, “Trouble In Mind” (this song was officially released on the 1993 boxset Janis) following some tuning and Jorma mentioning to Janis that the typewriter may be going while they play and maybe it will keep time. Kaukonen pops the opening licks in serpentine fashion as Janis enters with the first verse in stunningly. Joplin, just 21 sings with a husky jubilance. Influenced by Etta James, Tina Turner and Big Mama Thorton Joplin even at this early age howls with a bawdy throat. Kaukonen is also stunning in his already exceptional guitar abilities after quite a bit of practice during his college days. The music has already seeped between their floorboards into their bones. It’s the only explanation for such a deep internalization and dissemination of a timeless music created well before each respective musician’s time.

A 12 bar blues, “Long Black Train” follows and spotlights a malleable Kaukonen solo spot that features a series of dark blue elastic string bends. Again, Janis illustrates her stunning understanding of the blues idiom and a deft ability to sink herself into the lyrics. Jorma, shifts his picking and strumming approach throughout to keep things interesting with Janis close behind at every corner. At the song’s conclusion Jorma and Janis meet on vocals and guitar for the concluding lick which elicits a giggle from Janis.

Another blues/rag starts,  hailing from 1927 comes next with “Kansas City Blues”. Janis and Jorma had met in 1962 so it’s a fascinating look into their musical relationship by deciphering their repertoire through songs like this. Their bonding and eventual musical ‘freakness’ was rooted in these early sessions. Kaukonen starts the “Kansas City” opening lick with a practice run through before stomping out the tempo and jumping in with both feet. For a fan of these musicians this may be one of the greatest things you will ever here. Jorma picks out a groove that jumps like a cricket in a pricker patch, his signature guitar work instantly recognizable. Janis scats matter of factly, and when she says she’s going to Kansas City, you believe her, she aint never coming back. Kaukonen is a well spring of ideas, his string work constantly moving while Joplin keeps the melody grounded like a fence post in gravel. For the ‘rock room’ this reading of ‘Kansas City’ foreshadows what is yet to come for both Jorma and Janis while also encapsulating their deep running respect for influences of the past. 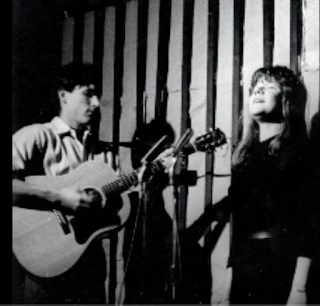 Jorma comments about the typewriter again before lobbing some riffs about and beginning the traditional cut, “Hesitation Blues” (Also featured on the 1993 box set Janis ). In just a few years the song would be a favorite of ‘Hot Tuna’ fans as it would feature on their debut LP, as it continues to be a favorite for Jorma and Jack of  right through today. Here, Kaukonen’s guitar parts twist and knot their way around his thumping boot heel while Janis leans waaaaaaaaay into the verses. This is one of the moments where the typewriter moves in and out of tempo lending a surreal alternative percussion to the jam. Kaukonen’s guitar has a snug and cozy softness in its tone and slips delicately through the rhythmic changes. The ease in which Joplin sings her part is comforting and menacing at the same time. She has already mastered her gruff sensuality, and it’s just not playing a part for her. “Hesitation Blues”, like “Uncle Sam Blues” would be co-pted and become a career song for Jorma and the cause of that just may be the way Janis sung it back in 1964.

“Nobody Knows You When You’re Down and Out” is another 1920’s blues classic that was made popular by Joplin idol Bessie Smith. Classic rock fans are well familiar with Eric Clapton’s cover of the song on 1970’s: Layla and Other Assorted Love Songs. Here, years prior Kaukonen and Joplin stay tight to Bessie Smith’s reading with Jorma finger picking out the brassy melody of the indigo horns of the Smith recording. Joplin mirrors Smith's asthetic in some ways, but leaves her unique and substantial stamp all over the recording. Airy and spacious, Jorma will exhale a stringy lick and Joplin will undulate her voice in kind. Crisp as a Golden Gate morning Joplin’s perfect dictation pulls emotions out of the blues that make you wonder how someone so young could sing as if they have lived it. She croons so effortlessly, whenever her voice raises slightly the ambiance of the room amplifies it to a stunning effect. There is one small stumble toward the end where both Jorma and Janis’s understanding of the ending of the song differs, to which Jorma agrees he like Janis’s way better and they conclude the song together. 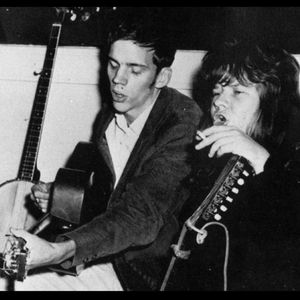 The final song available on the circulating recording is an original Janis Joplin composition and the only one available from this session. “Daddy, Daddy, Daddy” is a 12 bar blues that begins with some straight and exciting rock riffing by Kaukonen. This early Janis original uses the theme of the ‘Daddy’ figure and how the protagonist does not want her “Daddy” whether of the sugar variety or biological kind to be taken away, while the subject states what she can do to keep him happy. While basic in its construction, Jorma lets an aggressive solo out of the bag in the songs framework to which Janis can be heard digging on. Again, to the point of redundancy, Janis is blues vocal perfection.

The cassette ends there and what we are left with is a brief yet exceptional capture of two rock legends learning, playing, practicing and honing their craft in a laid back and natural environment. At the time of this sonic document neither knew what the future would hold for their abilities. The magic contained on the “Typewriter Tape” is a small glimpse of the impetus that would soon start a multicolored and hallucinatory journey to the stars for Jorma and Janis via their stunning musical talents.

Posted by talkfromtherockroom at 9:07 AM