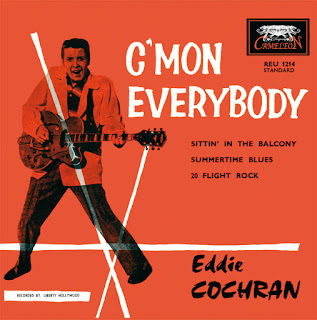 Currently jamming in the ‘rock room’ is a highly influential early ‘rock and roll’ classic. Nobody encapsulated the angst and attitude of the ‘rockers’ in the late 1950’s more than rockabilly and guitar legend Eddie Cochran. The perfectly dressed guitar wielding ladies’ man was also adept at guitar, bass, drums, and piano and was one of the first musicians to dabble in multitrack recording. What is even more amazing is that Cochran accomplished his popularity all before the age of 21. This guy was a rocker before it was fashionable; he wore makeup, composed music, lived fast and died young. His songs have become the head cornerstones of rock, and his wide ranging influence touching the “Beatles, “Kinks”, “Who”, “White Stripes”, “Springsteen”, “Van Halen”  and a host of other musicians too numerous to name.  The famed cuts, “Twenty Flight Rock”, “Somethin Else” and the subject of this rock rant, “C’mon Everybody” still retain the power and grace from the day they were birthed. As an addendum, not that it matters, but for those who dig this sort of thing, Rolling Stone listed “C’mon Everybody” as #403 on the list of their top 500 rock and roll songs.

Filling the huge void left behind in rock music by Elvis Presley joining the military, in more ways than one Cochran may have been a bit more Elvis than the king was. “C’mon Everybody” originally appeared as the ‘B’ side to “Don’t Ever Let Me Go” on Liberty single F51166 released in October 1958. The song was composed by Cochran and Jerry Capehart who also co-write “Summertime Blues” with Eddie. Between March 1957 and August 1959 Cochran had seven Top 100 records; one of his biggest smashes being the aforementioned "Summertime Blues", which peaked at #8 {for 1 week} on September 29th, 1958. “C’mon Everybody” upon its release peaked in the UK at #6 and in the US at #35. Posthumously the song became a towering influence on the next generation of UK and US musicians who were coming of age during ‘rock’s’ formative years. Groups of note who covered the song include ‘Humble Pie’, Sex Pistols and Led Zeppelin. Cochran was also a major influence on the musical approach of ‘The Who’ in both style and groove.

‘C’mon Everybody’ plays like a tightly wound pack of explosives, a silvery spaceship trailing across the conservative musical night sky of the late 1950’s. Lasting just under two minutes, there is a lot of excitement in a small package. The song opens with a jittery popcorn crack of bass and a closely following thumping tic toc drum groove supported by tambourine. Cochran’s lush acoustic brush strokes enter and lather colored chord changes over the sensual rhythm. 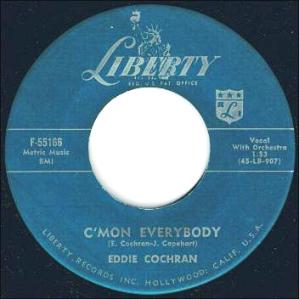 The collaboration of instruments is delicious, with Cochran’s cavernous vocals rhythmically dueling with the crisp snare strikes and syncopated bass strikes. Lyrically the song is an invitation to adolescents of the era to let loose and party. A perfect example of why ‘rock and roll’ was such a threat to the adults of the period, as well as why rock/rockabilly was such an integral part of the artistic revolution and expression of teen angst that would peak by the mid to late 1960’s.

The track doesn’t contain a wild guitar solo, nor does it need to. Just raw emotion, an ass shaking groove and an invitation to everybody to get it on while they can. It is sometimes difficult to understand the importance of song, books, or paintings in the context of history, especially through the thick mists and faded memories of time. The ‘rock room’ sometimes contemplates what were the reactions of art created during times of change and upheaval? What did these hypothetical artistic creations change or affect, if anything? Regardless, in the case of “C’mon Everybody”, similarly to Berry, Perkins, Cash and Presley the music being created was simply a way to avoid the often difficult life their families had lived as well as a way into their own creative minds. The music instituted change both internally and externally and offered escape for both the creator and recipients.

Back to the song at hand, the beat starts and stops like a pimped out caddy in heavy traffic. Cochran’s vocals elicits other singers of the time but contains his own unique rasp and earnest sentiment. The verses focus on Eddie’s vocals with his guitar strings palm muted and the substantial harp like guitar strums returning with each “C’mon Everybody” statement. The song runs through the changes breathlessly, leaving only cigarette smoke behind. Following the final verse Cochran sums up the fun being had in the tune with:

Well we'll really have a party but we gotta put a guard outside If the folks come home I'm afraid they're gonna have my hide They'll be no more movies for a week or two No more runnin' round with the usual crew Who cares, c'mon everybody!”

Unfortunately only a year and a half after the release of “C’mon Everybody” Cochran would die in a tragic car accident in the UK. Not unlike his contemporaries, Richie Valens, Buddy Holly and the Big Bopper, Cochran’s talent would be grounded before reaching proper cruising altitude. 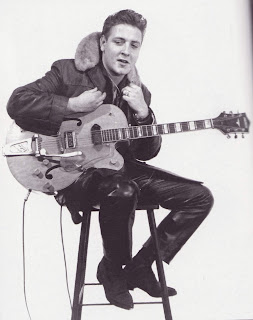 What cannot be denied nor understated is he influence of “C’mon Everybody” on rock music then or now. It may be stating the obvious, but the song sounds as fresh and vital as it did in 1958 and its sonic’s have the same effect on the body and mind, at least in the ‘rock room’! The live version I have included here from Hadley’s Town Hall Party 1959, is absolutely insane. While the single version is amazing, and the focus of this rant, the live version quivers with a kinetic energy. Cochran plays his signature Gretsch G 6120 electric hollow body, there is a jingle jangle piano with a heavy left hand not audible on the studio recording, and the rhythm section has filled up with high octane. Cochran shimmies and shakes, while throwing his shoulder into each verse. Gone in a blink of an eye, just like Cochran this black and white live cut will leave historians of rock wondering what could have been.

Posted by talkfromtherockroom at 10:17 AM