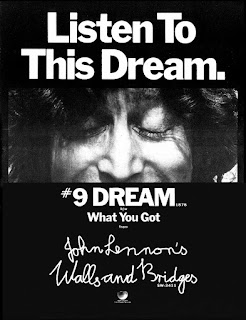 Revolving in the ‘rock room’ on this beautiful morning is John Lennon’s ethereal 1975 release, ‘#9 Dream’. ‘#9 Dream’ was the second single to be released from the 1974 LP Walls and Bridges following ‘Whatever Gets You Through the Night’. Released in January 1975 as Apple R 6003 in the US and the UK and b/w 'What You Got', the cut fittingly peaked at number 9 on the US charts and 23 in the UK respectively. The song was also nestled on side one of the record as an important album track. Lennon and Beatle fans are aware that the number 9 always played an important role in Lennon’s life, ranging from dates, including his and son Sean’s birthday’s, addresses, musical coincidences and song titles.’The song ' #9 Dream’ is an obvious recipient and confirmation of Lennon’s awareness and belief in numerology. The song continued the thread of thematic numeric elements that traced Lennon's entire life.

In early 1974, during Lennon’s famed ‘Lost Weekend’, Lennon had taken on producing Harry Nilsson’s 1974 LP Pussycats. During this time, Lennon was also as per usual demoing his own material for his next album. Demoed during this time were a number of fragments including ‘So Long’ which was the melodic genesis for what would later become ‘#9 Dream’. According to May Pang (whom Lennon was with during this time while separated from Yoko Ono) the early takes of ‘#9 Dream’ were also composed under the working title of ‘Walls and Bridges’ as well.  May Pang has said that Lennon loved ‘#9 Dream’ and it was one of his favorite songs of the time. Later in a 1980 BBC interview Lennon changed his tune saying, “That’s what I call craftsmanship writing, meaning, you know, I just churned that out. I’m not putting it down, it just is what it is, but I sat down and wrote it, you know, with no real inspiration, based on a dream I had.” Lennon was often conflicted, like the aforementioned statement with his music, and the ‘rock room’ feels he was even more so in the case of ‘#9 Dream’ as it had been composed while he was estranged from Yoko Ono. In hindsight Lennon may have not wanted to express any sort of public affection for the song.

While in the midst of the crazed Los Angeles Nilsson sessions Lennon had been developing a string arrangement for Nilsson’s cover of the Jimmy Cliff song, ‘Many Rivers to Cross’. Cross pollination and subconscious composing collaborated in the mind of Lennon where the Cliff song string arrangement mutated into what would become the ‘#9 Dream’ framework. According to Pang and later confirmed by Lennon in his 1980 Playboy interview, Lennon woke from sleep with the ‘#9 Dream’ melody spinning around in his REM addled mind. Along with the treasure trove of music Lennon also appeared from the land of slumber with the gobbledygook lyric, ‘Ah, bowakawa pousse’ pousse’’. While the phrase meant nothing literally Lennon loved the sound of the words and ironically of the nine syllables comprising the dream letters. The whimsical saying would become  the central axis in which the song spins. When taken at face value, the other lyrics of the song are a reflection on the insane life that Lennon had lived up to that point. One that we can only imagine and speculate on.  Lennon himself wonders, ‘was it just a dream?’ and states that it, ‘seemed so real to me’. 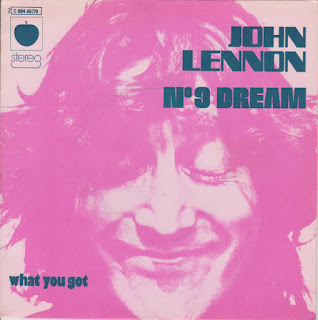 Following his creative dream Lennon collaborated the segments of sleep and inspiration and took the song to the studio for consideration for Walls and Bridges. The musicians contributing to the track are Lennon’s usual cronies, featuring, Jim Keltner on drums, Jessie Ed Davis on liquid slide guitar, Nicky Hopkins on keyboards, Lennon and Eddie Matteau on acoustic guitars, Bobby Keys on saxophone, Ken Ascher on clavinet, Arthur Jenkins on percussion and the ‘44th Street Fairies’ on backing vocals spotlighting May Pang, Lori Burton and Joey Dambra. Lennon referred to this line up as the ‘Plastic Ono Nuclear Band’.

Perhaps influenced by his studio time with Nilsson, Lennon coats the heavy production of the song in a thick dressing of clouds and stardust. Swelling strings, and sugar coated vocals illicit a comfortable  relax between the sheets. The vocals, like many of Lennon’s dating back to the Beatles are slathered in tape delay and echo, in addition to being double tracked. The result is a quixotic and otherworldly voice singing from a great unknown. The cut encapsulates the sleeping, waking, dreaming states due to Lennon’s deft arranging and the soft aesthetic of the instrumentation.

As the song begins Jessie Ed Davis’s plump and icy opening slide guitar reveals to the listener a great open expanse of sky. Word is that Lennon asked Jessie Ed to sound like Harrison and his famed slide work, if that is the case he was pretty successful! The song ascends through its changes, its arrangement breathes with its head already in the clouds. As Lennon’s vocals enter, ‘So long ago….’ I can feel the clavinet shift the music psychedelically under the chiming acoustic strums. Lennon’s words sound omnipotent

After the opening verse, Lennon sings the lines gifted to him by sleep, ‘Ah bowakawa, pousse’ pousse’’ with a chorus of sky people. Funnily enough and in typical Lennon fashion the last words of the lyric were originally sung like ‘pussy, pussy’. After an A and R man from Capitol heard this, Lori Burton the wife of engineer Roy Cicala told Lennon that he should change it to something ‘French’ sounding, (hence the ‘pousse'’ statement)so it would actually get played on the radio! Remember that Lennon was always placing hidden messages in songs back to the Beate days, put that’s a whole other rant! Following the ‘Ah, bowakawa’ interlude the song defies gravity just for a moment to hang weightless among a shimmering snow globe of  twinkling sound. The timely caesura increases the listeners wonder for just a moment before suddenly being dropped quickly through the atmosphere and back into the verse. 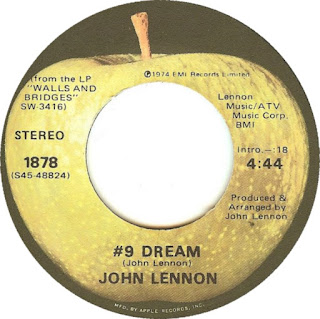 Lennon uses his full vocal range from conversational to a chill inducing falsetto which begins in the middle eight. May Pang sensually whispers Lennon’s name when John sings, the ‘Someone calls out my name’ lines only adding to the disorienting array of sound. Following the second verses, Pang again returns to whisper John’s name following the ‘music touching my soul’ lyric. Here it almost sounds like she is whispering ‘George’. Officially it’s John’s name backwards, but many myself included like to think it’s a tip of the cap to his former Beatle partner partly because of the very Harrison sounding guitar work by Jessie Ed Davis.

Again the music falls away to almost silence but instead of returning to the verse there is a repeat of the ‘Ah bowakawa’ refrain. Chanted like a melodic mantra, Jessie Ed delicately weaves in well-timed notes as the music descends to earth, before suddenly ascending for another round while fading into the dark blues of the horizon.

Listening to John Lennon’s compositions through critical speakers is often a tall task. What hasn’t been said about Lennon’s songwriting abilities? Anything Lennon ever wrote is going to be compared to his Beatles work, and his solo work is often held against his fellow Beatles and their own solo careers. That being said, what never changes is his ability to turn a phrase or invent a unique melody. These are gifts that Lennon always used and never lost. Even in 1974 prior to his self-imposed 5 year exile from rock and roll where he referred to his work of this period to that of a ‘semi sick craftsman’ he could be counted on to produce musical magic. Regardless if Lennon thought his work was that of inspiration or that of a real job, what was created was unique and truly Lennon’s own. ‘#9 Dream’ is a track that contains a plethora of Lennon’s compositional approaches; inspiration, belief, recycling, and subconscious mining. The resulting song is one of the best solo cuts he ever created.

Posted by talkfromtherockroom at 9:08 AM