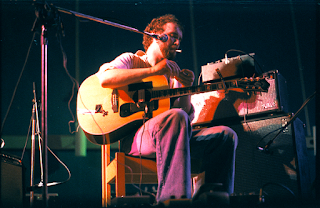 Flickering on the flat screen in the ‘rock room’ today is a wonderful audio visual document featuring John Martyn playing on the BBC series Rock Goes to College. Played and broadcast from Reading University on October 20, 1978, the performance features a 40 minute solo show by Martyn in support of his 1977 LP One World. The entire performance was been released officially in 2006 on the DVD John Martyn at the BBC.

The college crowd is raucous and it is a testament to Martyn’s power, ‘grace and danger’ that he brings the assembled crowd to complete silence during a number of his songs. Only the man and his guitar is spotlighted in this performance.The broadcast opens with an already in progress, ‘May You Never’ (a song also covered by Eric Clapton for his Slowhand album). The song is one of Martyn’s most beloved and well known tracks and here it is given a percussive and swinging acoustic groove by Martyn’s snappy strumming patterns. Following a round of applause for the familiar number and the MC’s introduction, Martyn gathers his electric Gibson SG guitar.

In a spectacular contrast Martyn chooses to play ‘One World’ next, the title track from his most recent LP release. Contextually and lyrically, a simple request, ‘One World’  is a gentle reminder that regardless of personal beliefs we are all together on this spinning blue ball like it or not. While the studio recording is an atmospheric bird-eye view of the earth, here in live performance everything is played and morphed by Martyn and his electric guitar and his series of pedals.

Martyn begins the song with a streaking stratospheric drone. What makes it even more powerful is the accompanying video which allows us to witness the sonic wizardry. Martyn slurs our the delicately airy melody which hangs motionless like white linens during a still evening. Martyn sets the tempo with an unseen astral metronome. Each note is an eternity, each sonic swell a mysterious wave swirling toward shore. Eyes closed Martyn sings each line carefully, each drawn out vocal a universe unto itself. Midway through the song a soaring distortion creates a more aggressive bed for Martyn to scat, ‘One World’ over the top of. Martyn clenches his eyes before slashing a dark ray of feedback from his guitar, he tugs at the neck of his SG stretching the note. This leads to a towering series of licks that grow before dissipating into molecule. The song swings like a transparent pendulum surrounded by sonic doves and life giving water. I can assure you that this performance is unique unto itself, like a UFO or unknown sea creature, a beautiful mystery.

The song draws puzzled but honest applause from the crowd who must realize they have witnessed something special. A slightly jittery Martyn introduces the next song followed by a big sleeve swipe across his nose. Martyn’s acoustic comes back out for ‘One Day without You’ a track from Martyn’s 1976 LP Sunday’s Child. What a stunning rendition of this underrated track from Martyn’s catalog. Aggressive thumbed percussion keeps Martyn’s unique love song pumping like a love sick heart. Martyn’s lyrics elicit the sadness Martyn feels when his partner is not around and how everything is slightly less resplendent when she is gone. His vocals are long and smooth and stretch over the percussive strings as verbal taffy, virginal and sticky sweet. 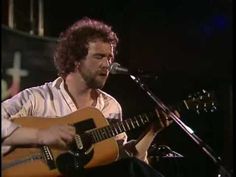 Martyn lets out an unintelligible yelp following the priceless reading of ‘One Day Without You’, before introducing ‘Dealer’, which John dedicates to ‘most of his friends’. Martyn quickly pounds the remainder of his beer, tunes up his acoustic and illustrates the wonders of his Echoplex working in conjunction with his acoustic. Creating his own rhythm track by thumping out a riff on his hollow body, Martyn joins by laying another melodic coat of paint over the base. Martyn loses himself in the song, rocking to the created rhythm by adding glittering licks that reverberate in time with the original tape delay. The meter of his verses in conjunction with the rolling groove illustrate the eagerness of the songs protagonist. The song brings the listener to hypnosis with only Martyn’s gritty vocals breaking the spell.

Following a quick tune up and thank you to the crowd, Martyn introduces the next song as, ‘roses in the teeth time’, and says that ‘this is the closest we will get to true romance all night’.  Another song from One World follows with ‘Certain Surprise’ which quietly sneaks up on the listener through jazzy changes and fragile singing by Martyn. Beautifully delicate in its construction, the street corner busker melody is earnest and gentle and echoes in the distance as lovers touch hands across a candlelit table.

Martyn stays on acoustic but again institutes the Echoplex for “Big Muff” which he humorously introduces as another ‘love song’. Also from the One World album, ‘Big Muff’ was a collaboration with famed dub producer Lee ‘Scratch’ Perry when Martyn visited Jamaica with Chris Blackwell from Island Records. The song is a wonderful blend of humor, musical magic and Jamaican weed. In this rendition Martyn sets the tempo with plucks on his bass strings similarly to ‘Dealer’. He then dresses the song with a funky central lick and croons with a free flowing rock and roll slur.

The performance concludes with a rare ‘In Search of Anna’ to which Martyn again reaches for his Gibson SG. ‘Anna’ had its musical roots in the One World soundscape ‘Small Hours’ which used natural sounds and manipulated guitar to create a starry beg of sound. ‘In Search of Anna’ was released as a single in 1978 only in Australia for the soundtrack to the film, In Search of Anna. The song was co-written with Michael Norton who set lyrics to Martyn’s music. In this footage Martyn develops the song proper by pumping on his wah-wah and playing well timed harmonics on his guitar. Martyn sums up the feeling of this song by placing his hand over his eyes simulating that he is watching something in the distance. A storm of distortion disassembles the placid soundscape which reveal Martyn singing the verses. 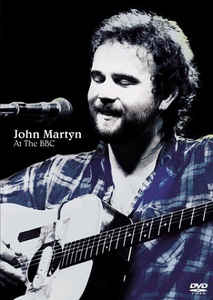 The credits begin to roll as Martyn sings a combination of the lyrics over the silvery topography of song. Martyn is at the directive of the muse as he free forms the lyrics and improvises the song constantly looking for Anna along the horizon. Unfortunately, like the opening song, the closing song is truncated before reaching its conclusion. What a way to conclude the performance with an mostly unheard song, disseminated like a quilt of night sky draped over a full house of college students.
Typical for John Martyn, this 1978 performance includes wonderful songwriting, experimental improvisation and soulful performing. There is a hearty knotted thread of melody for the audience to hang onto and a large dose of inprov to keep Martyn interested. In the ‘rock room’s’ humble opinion this performance can be considered a high water mark for John Martyn. While Martyn had much more music to be be heard, there is something special about this concert, prior to the health and addiction issues Martyn would still face.

For John Martyn fans in the know his performance on October 20, 1978 is not to be missed and captures the artist at work during one of his many peaks as a musician. For those just learning about John Martyn (unbelievably there are many) this performance is a glimpse into his substantial catalog and a taste of the multiple flavors of his music ranging from, folk, rock, jazz and experimental songs that express the multiple aspects of Martyn’s personality and in turn our own.

Posted by talkfromtherockroom at 6:58 AM