Take One: Neil Young and Crazy Horse – ‘Will to Love’ – Won’t Be Tamed 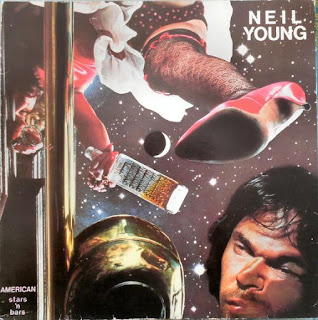 Referred to by Neil Young as ‘one of the best records I’ve ever made’, ‘Will to Love’ is not only one of the most unique compositions in Neil Young’s extensive canon, but arguably one with the most detail and depth. While the track is housed on Young’s 1977 LP American Stars and Bars the song, typically to Young compositions has an interesting story and development. Some folks, like Young biographer Jimmy McDonough state that the song was originally planned for Young’s unreleased album Chrome Dreams. Others, have theorized that the song was rehearsed during sessions for 1976’s Long May You Run.  Both of these assumptions make sense as the era between the two albums is blurred. The ‘rock room’ asserts that ‘Will to Love’ was rehearsed during the 1976 Long May You Run sessions because the song was also considered as a Crosby, Stills, Nash and Young recording.
For those familiar with CSNY history, there were a series of aborted sessions during 1976 when Stephen Stills and Neil Young had David and Graham visit Criteria Studios where they were working on the Long May You Run Album. David and Graham added harmonies to a number of tracks which were unfortunately removed and or discarded when fighting and disagreements set in. One track which has been released unscathed for those interested is the absolutely amazing ‘Black Coral’ featuring CSNY and released on the Stephen Stills box set Carry On. The story goes that when Young met with CSN after recording ‘Will to Love’ at his home, David Crosby encouraged Young to keep the song as a solo cut.
Anyways, I digress, what ended up happening in the end was ‘Will to Love’ was released as a Neil Young solo track and placed, as previously stated on Young’s 1977 LP American Stars and Bars. There was also a promotional single released by Reprise Records in conjunction with the album b/w a live cut of 'Cortez the Killer'.The genesis of the seven plus minute ‘Will to Love’ began with Young recording the song demo style at home on a 2 track cassette recorder in front of a roaring fire who’s snaps and crackles can be heard on the resulting recording. Young has said that the home recording took him about a normal 8 hour work shift to record and mix. The resulting cassette (presumably after Young’s attempt with CSN) would be taken to Indigo Ranch in Malibu, California where the tape would be transferred to 24 track where Young would undertake a series of overdubs onto the song. Briggs and Young made a practice during this era (1975-1977) of recording at Indigo during full moons to great success. The ‘rock room’ can hear wah-wah guitar, piano, vibraphone, bass and various percussion instruments draped over Young’s first home recording.

In an interview with Bill Flanagan in 1985 Young said the following:

‘Will to Love was written in one night, in one sitting, in front of the fireplace. I was all alone in my house and I was really high on a bunch of things… “I have never sung it except for that one time. That’s what I used for the record. A Sony cassette machine, which I transferred to 24 track and then played back through my Magnatone stereo reverb amp. I brought two tracks of the cassette up on a couple of faders with the stereo vibrato in it, then I mixed them in with the original cassette for the sound of the fish. I overdubbed all of the instruments and mixed it in the same night’. 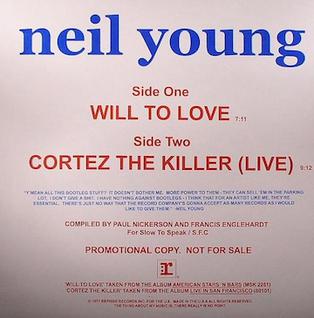 ‘Will to Love’ contextually uses the metaphor of a salmon fighting its way through turbulent waters in order to find a mate. This metaphor is stratified with comparisons and contrasts between our natural world, our primal urges and our need for companionship. The lyrical content expresses a craving for love while also displaying an awareness of the pitfalls of pursuing something that may not exist. The lyric, ‘It has often been my dream to live with one who wasn’t there’ frames the work, by both opening and closing the song. The line also illustrates the author’s constant struggle with his/her own ‘Will to Love’  and how that will can both alienate while at the same time bringing together.

The song begins with a sonic quiver and a ghostly vibrato. Young’s, melodic and double tracked ‘la, la, la, la’s’ initiate motion, as the listener has been plunged below the waterline. Bubbles and smooth rocks surround the subaqueous melody. The ‘rock room’ likens it to listening inside of a dream. Young’s fragile acoustic strumming is in the forefront. The song is pillowed like a homemade recording, the lo-fi aesthetic only increasing the reticent vibe. Young’s fireplace sparks aurally, while Young’s double tracked vocals shadow each other closely leaving aural footprints inside of footprints. There is a tangible atmospheric intimacy in the feel of the recording, almost as if Young has packed himself and his feelings away in an emotional buoy filled with cotton. 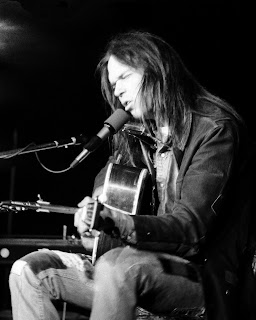 Early in the first part of the song one of Young’s vibraphone overdubs from Indigo is discernible as a woody thump. Then following the first ‘chorus’, some spinner bait percussion flashes just beneath the water’s surface in light clinks. While the flow of the song remains steady, the sonic additions emulate the journey’s pools and eddy’s as well as the success and failure of the narrator in reaching his ultimate goal.

Young was operating and recording in a lo-fi fashion in the mid 1970’s, long before it was a sought after aesthetic by artists. The original vibe of Young’s home recording is the foundation of ‘Will to Love’ to which the narrative rests. Young sings the song like a secret over the clear ethereal drift. The second first contrasts fire and water, an eternal primal burning versus the element needed to reach the narrators eventual satisfaction. Silvery clinks glisten in the undertow, Young’s fins visible above the waterline, with another dizzying overdub laid down by Young.

The third verse describes Young, the ‘singer on the stage’ as a jangling piano and off beat drums rattle from the shore line. The song whirlpools toward the conclusion of the verse with the lyric, ‘Sometimes I see what really isn’t there, like my true lover, and I care’. The mantra returns with the gentle chorus chant of ‘Got the will to love’ as both a confirmation and even a question.

The thoughts of both narrator and salmon, natural world and subconscious combine in the next segment as Young explains that he is a ‘harpoon dodger, and can’t, won’t be tamed’. A spectral wah-wah joins the sonic picture with fluidic punctuation. It’s addition both timely and perfect, its resonance lending a stringy overlay to an already percolating composition. 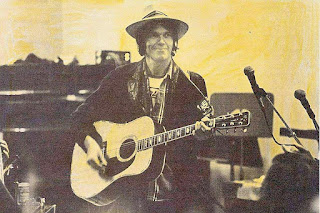 The song eats its tail, it’s concluding verse a hallucinatory consummation of both the will of the human ‘relationship’ in the narrators consciousness as well as nature’s own will to complete its internal mission of companionship and finding a mate. Only Mr. Young could provide such a magical metaphor for longing. The song concludes with the verse: “If we meet along the way, please sway beside me, let us sway together. Our tails together and our fins and mind. We’ll leave this water and let our scales shine. In the sun above and the sky below, so all the water and Earth will know. It has often been my dream to live with one who wasn’t there”.

The song as of the writing of this blog has never been played live in concert by Young. On the Neil Young fan website ‘Thrashers Wheat’ and anonymous poster wrote the following in regards to Young never have played the song on a concert stage; “I held up a banner at a 1999 show in Houston asking him to play it. He only smiled. After the show at the meet and greet I got up the nerve an asked him why he never plays it and he simply said "that is fucking personal".

In a career, (similarly to friend and mentor Bob Dylan) stockpiled with unreleased tracks, full length LP’s, live concerts and an entire website devoted to cataloging his fifty plus year muse it’s a shaky order to focus on one Neil Young track. It’s overwhelming. Regardless, ‘Will to Love’ is worthy of inspection for its unique recording, deep thought lyricism and diverse construction. It’s just one of many Young sides tucked away on a bulging record shelf that would make an entire career for a lesser artist.

Posted by talkfromtherockroom at 5:45 AM

Email ThisBlogThis!Share to TwitterShare to FacebookShare to Pinterest
Labels: 1977, American Stars and Bars, Neil Young, Neil Young and Crazy Horse, rock room, talk from the rock room, The Bullets, Will to Love