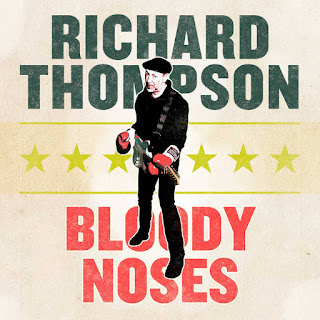 On July 3rd, 2020 famed guitarist and singer Richard Thompson quietly released a six track EP via the website Bandcamp. This collection was recorded during his and all of our recent quarantine during the worldwide Covid-19 pandemic. Thompson, like countless other working musicians has been unable to perform live (his main source of income) and has cancelled all of his scheduled concerts as well as his 2020 guitar camp. The one positive result of (if there is one) of musicians such as Richard being off the road has been a welcome plethora of home recordings, live streams and stunning new works of musical art which has been developed during lockdown.

Thompson’s six song EP is titled Bloody Noses and the songs all dangle from the same threads of confusion, fear, hope and faith. No matter our profession or artistic drive, at the present we are all facing the same world issues in addition to our own private battles. Richard Thompson has always been adept at bringing the dark into the light and revealing to his listeners that no matter how black the evening, we may never witness the dawn, and that is ok.

Recorded at home with all instruments played by himself (guitar, mandolin, percussion) and additional vocals by his partner Zara Phillips this all acoustic EP features the usual intelligence, humor and virtuosic playing we have come to expect from RT. Currently the EP is available as a digital download (both MP3 and FLAC), but during one of his recent live streams RT did say we will see a physical release at some point.

The EP begins with the track ‘As Soon As You Hear the Bell’. Using boxing as a life metaphor, Thompson sings richly about accepting the fights and the injuries that may come, and making sure that when the bell rings there will be no giving up. A fitting melodic attitude for our current situations. The hopeful chorus is a cool compress onto the listener’s fresh bruises.  Thompson’s acoustic playing is a blend of Curtis Mayfield playing an English folk song groove. Every stringed nuance is magnified through RT’s lacy picking and fresh vocals.

‘She’s A Hard Girl to Know’ follows next on the EP, and in the ‘rock room’s opinion stands alone among the six tracks because of its gossamered picking and shimmering chord changes. The airy arrangement, like many of RT’s songs allow for the narrative to peek through the yellowed pages of melody. Thompson’s construction reflects the ‘unknowability’ of the song’s subject. This aforementioned thematic approach of the ‘wild woman’ that Thompson is often attracted to has also played out in classic Thompson tracks like ‘Beeswing’ and Cooksferry Queen’. Here, Thompson per his usual wont, takes a well-worn look at relationships through a brand new angle and using a specialized lens.

‘If I Could Live My Life Again’, is a track that Thompson was playing during his most recent acoustic tour of January and February of 2020. In addition, RT took to showcasing it during his recent lockdown live streams from home. This typically strong RT track plays out as a tender acoustic blues. Pensive and hopeful, Thompson fingerpicks a muted rock and roll rhythm that is accentuated by plucky chords and dizzying circular licks. To the ‘rock room’ this track brings to mind the contemplation of a lost chap walking wet cobblestone streets wondering why he/she went left when the path bared right. A song of  past regret carried by a melody that moves into the future. 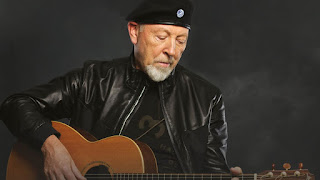 Thompson’s talented partner Zara Phillips joins RT on harmony vocals for the next song titled, ‘The Fortress’. This substantial cut is chunky and deliciously catchy. ‘The Fortress’ is our protective shell, our shield, which unfortunately has been breached by disease, media, and disrespecting friends. Life has been interrupted by true realities, and how we react to this and protect our ‘Fortress’ is the true test. Thompson’s verses and melody immediately seep into my head. RT’s chopped strums work with the lo-fi thumping, allowing his descending vocals to wrap around my synapses. The expansive and soaring chorus diverts from the melody quickly and scrawls its message across the fortress entry way. Thompson and Phillip's co mingled vocals inspire hope and induce chills. A wonderful cut.

Track five of the digital EP is titled ‘Survivor’ and is in the ‘rock room’s humble opinion a welcome addition to the Richard Thompson vault of stunning compositions. The song sways with the breeze of a light country waltz and sings with a glass held high and a nod to another fellow survivor. Here the instrumentation is some beautifully prickly mandolin drizzled over the top of RT's acoustic strums. Similarly to all of RT’s most enduring songs, the narrative is the final puzzle piece fitting into one empty space of 1000 different emotions. Thompson is offering a cheers to everyone, those who have lost love, misplaced hope and those who have given up or lost everything but continue to move forward and live. Thank you Richard for these beautiful songs.

The final song, ‘What’s up with You?’ moves with a pulse that RT compared to ‘Celtic Rockabilly’ during his recent online performance of the song. In addition to this musical clue, Thompson also notes a Buddy holly influence. The song swings with jolly attitude, with the title line being the axis in which the song spins. The narrator presses the song’s subject to reveal what exactly the crux of their issue could be. High speed strumming and pure rock riffing bring RT’s six song collection to a wonderful but short close.

Per my usual practice of leaving a link of the music I review, today, I ask if you are reading and are able please visit Richard Thompson’s band camp page:    https://richardthompson.bandcamp.com/album/bloody-noses-ep  and make a donation. You will not only receive an amazing collection of songs, but you will also assist in keeping Thompson’s head above water during his time off of the road. If you are a fan, getting this EP is a no brainer. If you are just getting to know RT, donate and discover.  As previously stated Thompson has said that as things return to a new kind of ‘normal’ his hope is that these songs will get a physical release (vinyl, CD). He also has noted that a second collection of songs are in the oven and will come out when fully baked in the next couple of months. In the meantime, let's ‘now be thankful’ for the songs RT has provided for all of us 'survivors'.

Posted by talkfromtherockroom at 5:09 AM